Mark: So I think we have a repeat customer here. A 2003 Mercedes-Benz SL500, what was going on with this vehicle?

Bernie: Yes, this is a repeat. We did a show about this one just recently. And this vehicle had a couple of issues actually. So the other issue was that the heater blower fan would come on when the key was off. And obviously that's not very good for the battery. It was kind of an intermittent issue. Sometimes would be on, sometimes would be off. And so that was basically the the task at hand.

Mark: That sounds complicated. What testing and diagnosis did you do?

Bernie: Yeah, there is complexity to the system because it's got this nice, we'll look at pictures in a minute, but it's got of course got this very fancy climate control panel with dual zone climate control. And the other issue I will add to this you know, when I started looking at it, is the actual heater when you turned it on didn't actually come on. So we had actually kind of two problems going on there.

So testing, of course, first thing we do is plug a diagnostic scan tool into the vehicle. See what kind of communication we get with the heater control unit. Cause it's all computerized through the various computer networks in the vehicle. And there was no communication with the heating control unit. So that either says there's no power going to it, there's a wiring problem, or the actual unit itself is probably gone.

But it can also be an issue in the, it's called a CAN bus, it's a communication network. There could be something wrong with that too. So determined that that was basically the issue. You know, there was no communication with the unit and tested fuses. There's basically three fuses to test. Two are pretty easy to access. None of 'em are actually really easy, but the two easier ones tested those, which were the more likely candidates to cause the problem. They were all fine. The third fuse, which is actually very difficult, buried under the driver's foot well was actually one that powered the fan motor. And of course the fan would actually work. So I figured, you know what? We better go to the control panel and do the testing there next. So that's kinda what we came up.

Mark: So what'd you find once you removed the control panel?

Bernie: Well, all the wiring was connected. So you know, that's kind of another thing, could the wiring be disconnected? I mean, it's almost impossible in this car. The wiring connections are so robust. They clamp into place really, really well. The odds of 'em ever coming apart. If you drop the car off a thousand foot cliff, they probably still wouldn't come apart. Wouldn't be anything left of the car, but the wiring connectors would still be connected.

But anyways don't do this at home. Yeah, do not do this at home. Do not ever do it. Plus it's a long, that's a very high cliff. Hard to find those. Set maybe somewhere in Europe. Anyways, I digress. Where were we? Oh yeah, back to the diagnosis. So, one interesting thing. So basically I determined, you know, there was power and ground getting to the unit.

The CAN bus connector was hooked up. So it was pretty much assured that the control panel was bad. But interesting thing is I unhooked it and then I clipped it back up. And the interesting thing is, after that the fan would stay on. Pretty much run all the time at a medium speed. And before it would come on for maybe 10 seconds and then shut off for a minute and come on for 30 seconds. So the problem actually got worse. So basically the control unit need to be replaced.

Mark: And what kind of options are there? I'm sure that it's a Mercedes, it's 2003. That might not even be made anymore.

Bernie: Yeah, you can get new. But we actually opted to get a used one based on the cost. And you know, and as you mentioned, this is a repeat job. I mean, we've done some very extensive and expensive work on the suspension system. So, you know, I think the owner was kind of, I would assume kind of at the end of the rope of spending money on things. So let's get this car fixed for the most economical way. So we opted for a used unit which actually worked out really well in the end.

Mark: And was that replacement panel same as the original unit?

And we should just go into some pictures of it cuz it's kind of interesting looking at the differences. But I mean, to make a long story short, the replacement panel is I think a lot better, and it certainly worked properly. So that's a very important factor.

So the car, again we looked at this one from a previous podcast. Beautiful looking car. This one's got the roof up at the moment. 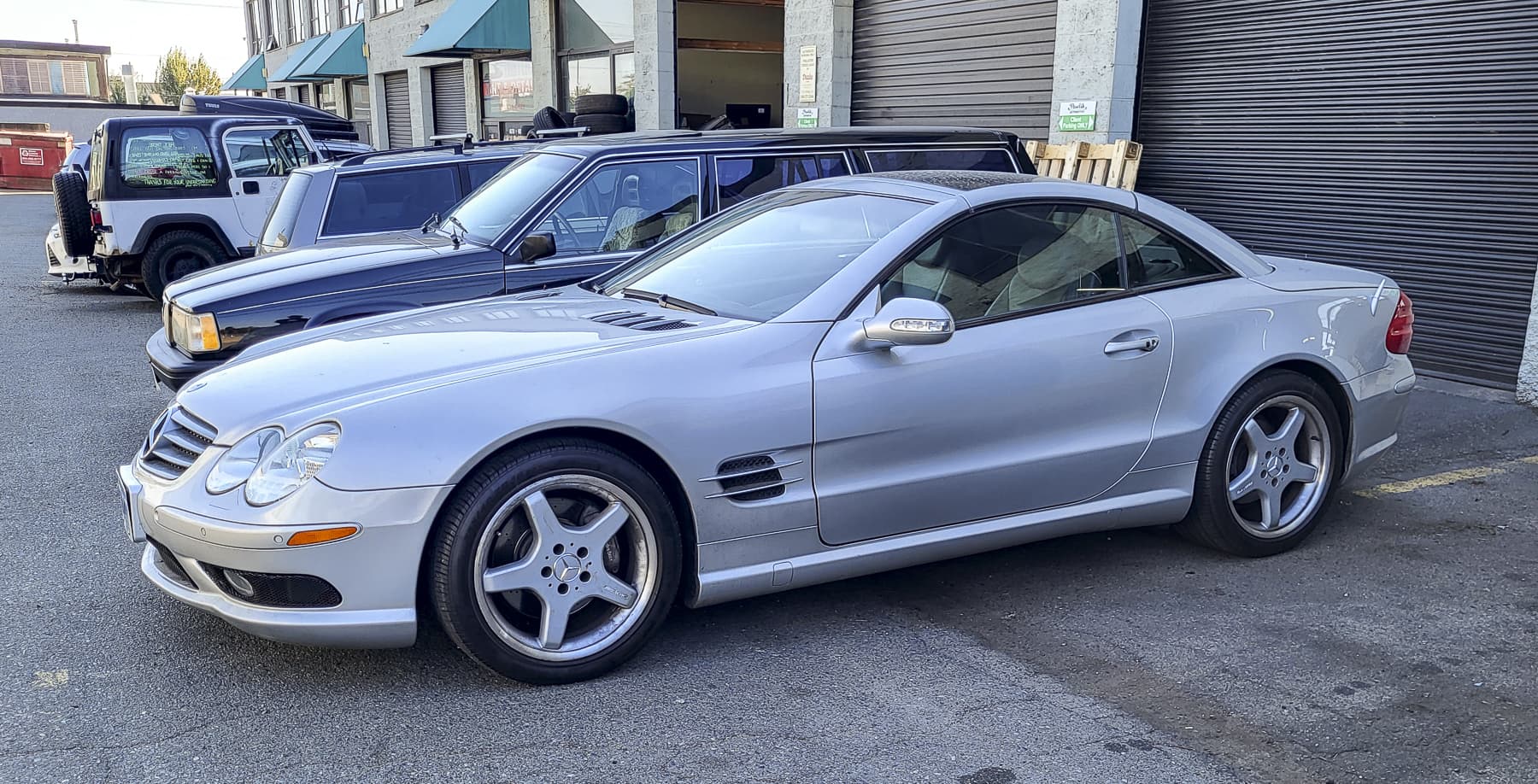 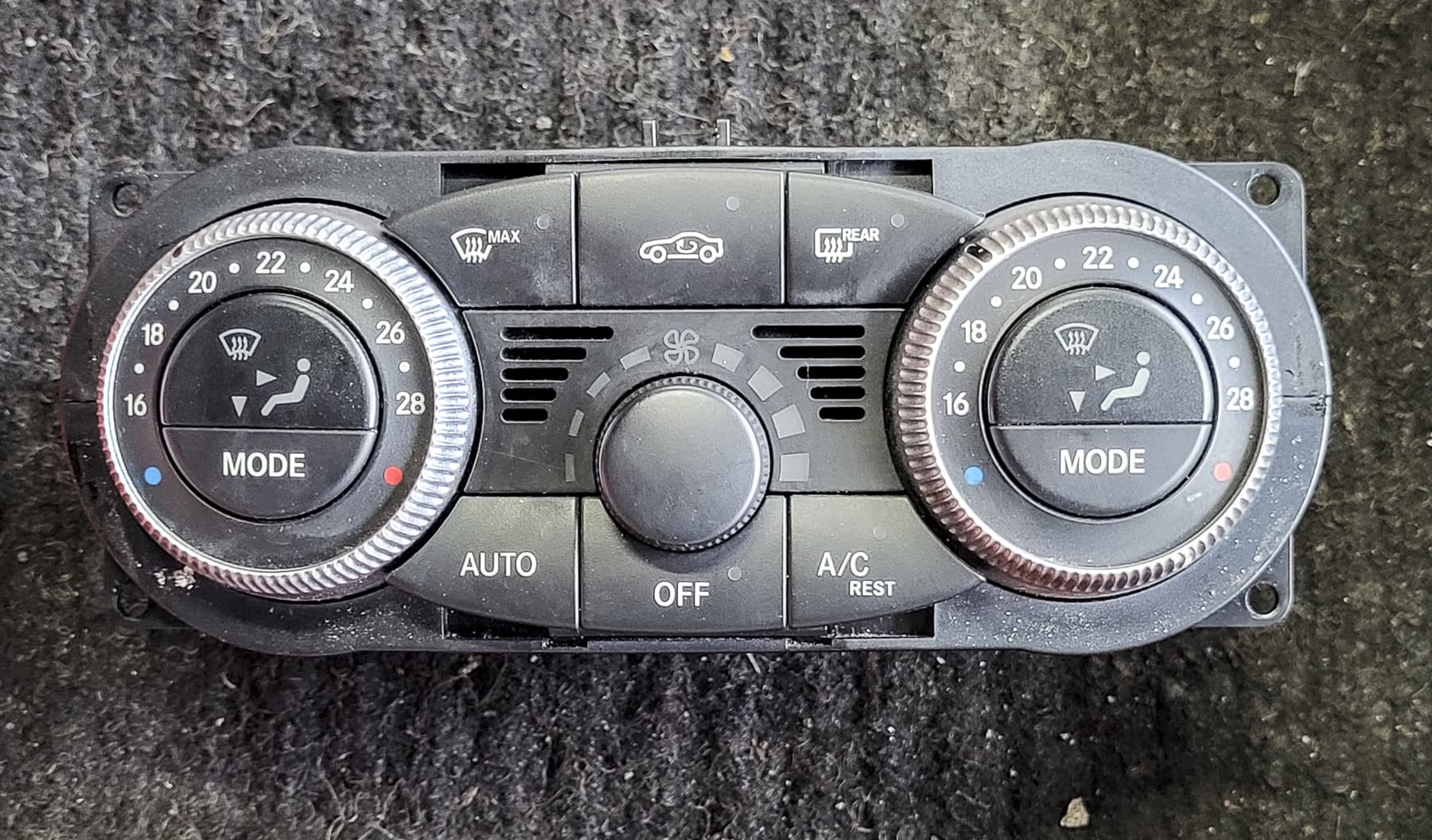 So this is the OE panel, the old one out of the vehicle. And actually, I'll just put right to the new picture. This looks much nicer because it's mounted in the nice wood grained mounting. 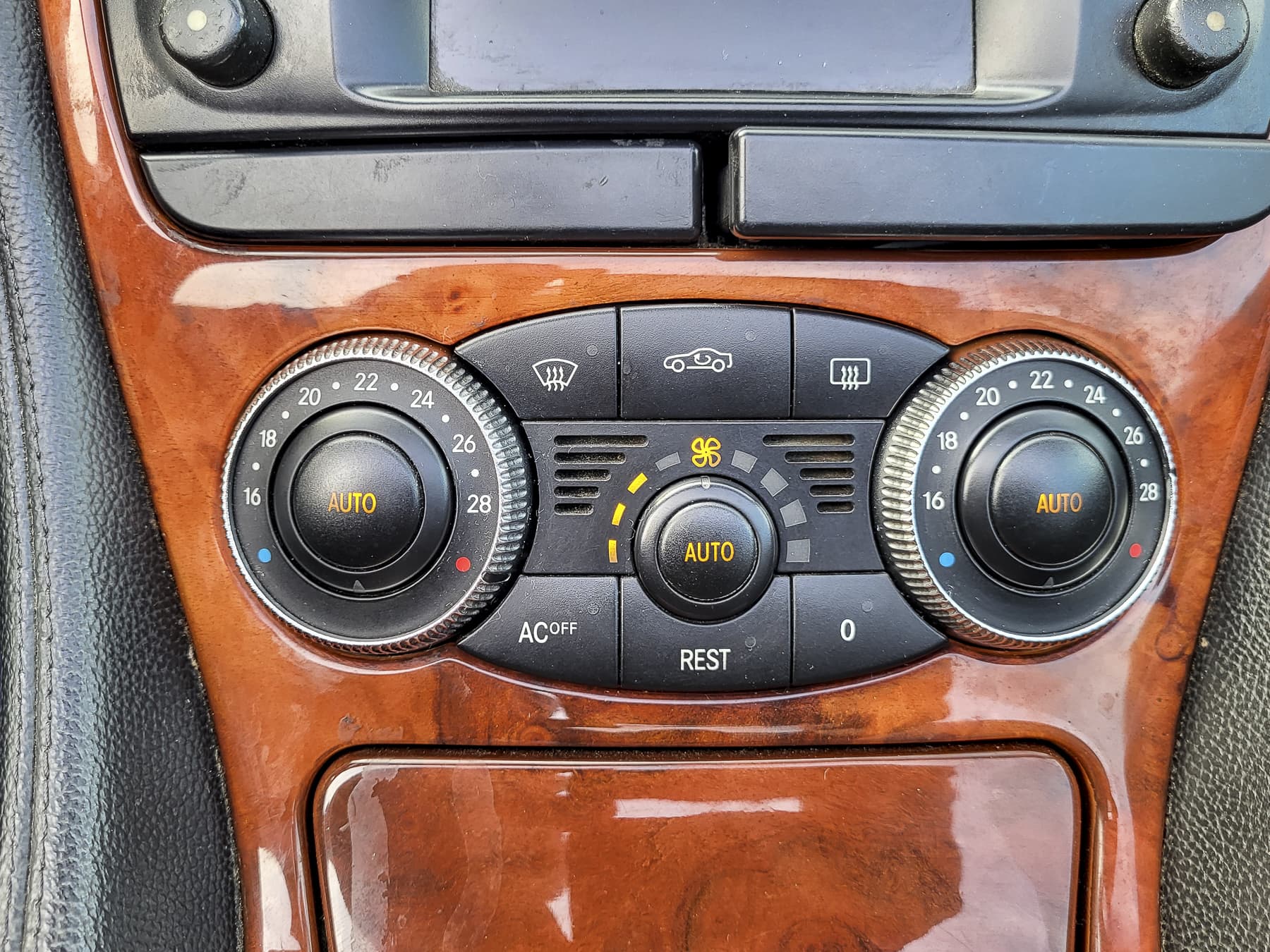 But you notice this panel, the controls are different. It says auto, auto. If you go to this other one, the selections for items are a little different. The fan knob is still the same. However, it doesn't have the auto feature on it. There's one big auto button and that just puts the whole panel into automatic.

But with the newest version, you can choose to, and now this is a slightly different picture. This is manual mode, so you can select, I want it to blow up and down. I want to blow on my face. And you can put any one of these into automatic mode. So you can put the right side in auto leave the driver's side in manual. You can put the fan in auto or you can put it in manual. So we'll just kind of scroll back this other picture here. 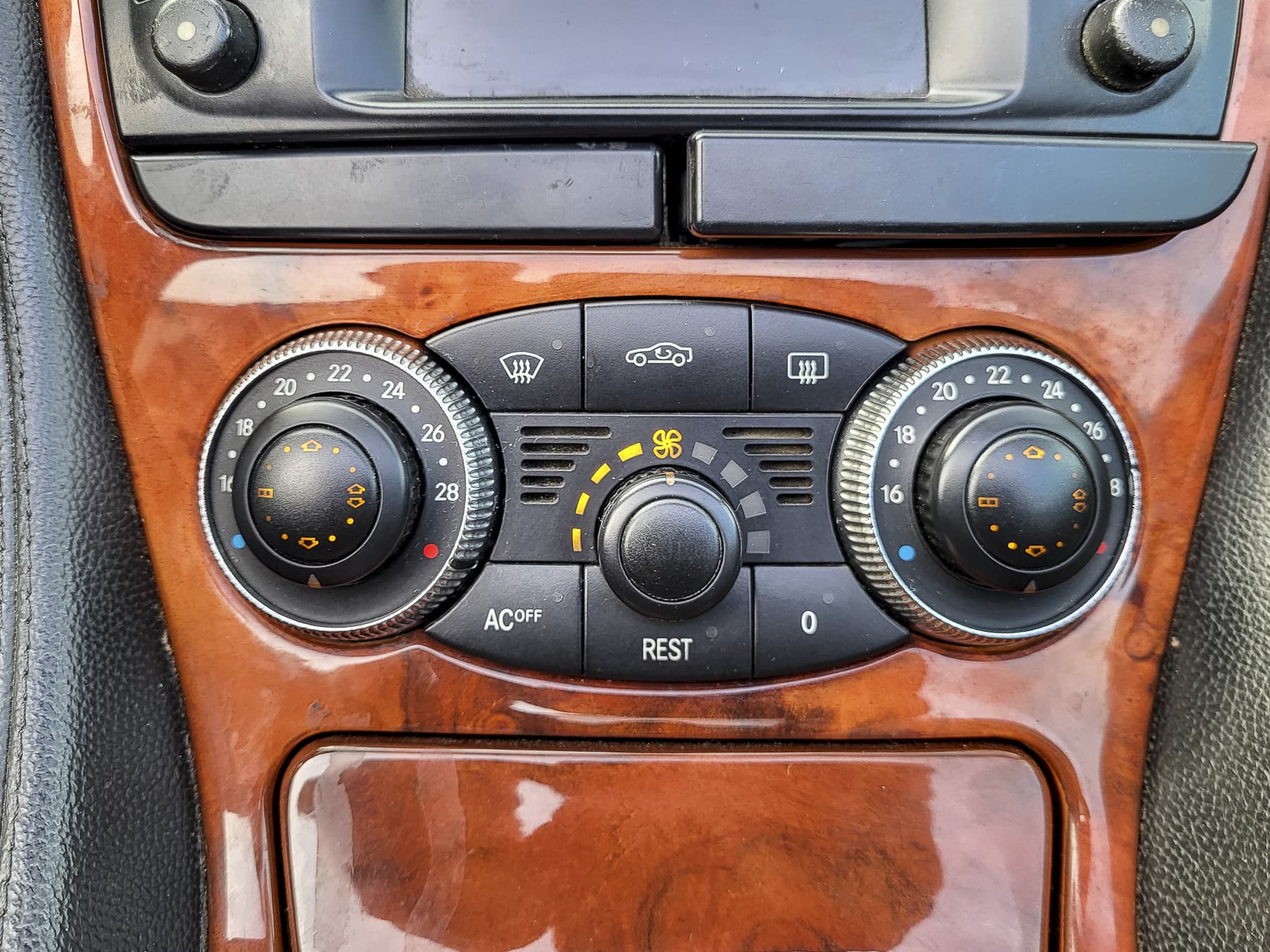 So I personally like the other panel better. You can just turn the dial and it does its thing. So those are the panels and both fully compatible with each other.

Mark: And so those panels, that's a newer version, maybe 2004, 2005, something like that where they've upgraded the panel basically.

Bernie: I can't say for absolute certainty, but you know, having had an 03 myself, I think they must have changed it part way through the model year. That's my guess. But there's definitely differences, I've noticed, you know, we work on quite a number of these SL500s and 55s over the years and different years, and I've noticed that there's definitely different range of models and features.

You know, some of them have the massaging seats, like this one had the massaging seats. We worked on some that don't have it, you know, they just have the power seat. So I think different models come different. Like the 55 is pretty much fully loaded. Some have the glass roofs, some don't.

Mark: So was this a plug and play install or did it require programming?

Bernie: Plug and play. I say that because always nice when things are plug and play. I don't know if I'm getting jaded in my years of working on cars, but sometimes I'm amazed. You plug something in and it has to be programmed to the car. And I'm going like, Why does that matter, you know? Or the module is only set for one particular, and Mercedes is really bad for this, the module, once you code it for the vehicle, it can't be used in anything else. And I'm going like, What a waste. You have to take this perfectly good module that could be reused for years and years and chuck it in the garbage. And I just find that really irritating. Very wasteful.

Mark: So these Mercedes are getting older. And they're a really complicated kind of car with air suspension and high performance engines and who knows, Turbocharges, et cetera. Are they still worth owning and repairing, keeping running?

Bernie: Well, they're certainly a super nice car. They are kind of complicated and I think that comes down to the individual owner of what you wanna do. But you can buy 'em for really cheap. So I think, at some point, if you take good care of it, I mean, part of the cost of keeping it up is just part of the, say, the thrill of owning the car. But it's part of the game of owning the car. You know, you wanna go buy one of these cars brand new equivalent which I don't think look as nice as these older ones. You know, it's probably $150,000. I haven't priced it out recently, but probably 125 at the bottom end. So, you know, if you can buy a used one for $15,000 and spend maybe $5,000 bucks a year, maybe a little more on repairs.

You're probably ahead of the game financially. But you know, again, this car spent a bit of time in the shop, but we've got a lot of things fixed on it that were kind of old and needed to be done, they kind of go in spurts. But if you have 150 or $200,000, just go buy a new one and don't worry about it. But they just certainly drop in value precipitously.

Mark: So if you're looking for repairs for your Mercedes in Vancouver, the guys to see are Pawlik Automotive. You can reach them on their website, pawlikautomotive.com. You can book right there, and they'll call you. They'll find out what's going on. They'll check into it. They'll diagnose a little bit over the phone, but very lightly so they're ready for when you show up for your appointment. Of course, then there's further diagnosis cuz what's actually going on. They specialize in actually fixing it the first time. They get a lot of vehicles from the other places in town that can't solve the problems. These are the guys that are the go-to for everybody. Even the other repair shops. You can call them (604) 327-7112 to book your appointment. You gotta book ahead. They're always busy. Pawlik Automotive in Vancouver.

Thanks so much for watching and listening. We appreciate it. Thanks, Bernie.