Mark: So 2006 Toyota Prius. This is a hybrid vehicle. What was going on with this car?

Bernie: This vehicle was brought to our shop. The owner had left it sitting for about a year. She'd been told by the Toyota dealer that the inverter needed to be replaced. And it's an expensive repair, so she decided to leave it and was now committed to fixing it. So she had chose to bring it to our shop to have us look at it and repair it.

Mark: So did you just hammer a new inverter in there or did you do some testing?

Bernie: No, we did some testing. Of course, you know, how we work around here. So first thing, the car was completely dead, so they tested the 12 volt battery. It wouldn't take a charge. It was completely dead as we expected it might be. So the first step was install a 12 volt battery because we couldn't get any information out of the car without having that going. And so we put that in. Then we were able to see if the car would power up. The internal combustion engine wouldn't start. Basically the ready functions of the car wouldn't happen. So did some scans. Did some tests. There was a DC DC converter code. We tested that unit out and found it was faulty. And that was the cause of our, at least, no start.

Mark: Okay. What is a DC to DC converter?

Bernie: So what that does is it converts the high voltage battery. So this vehicle has basically two electrical systems. It has the high voltage system, which drives the vehicle. And then it has the 12 volt system, which you'll find in any normal car, which runs all the electrical accessories. It works with the hybrid system and also of course, works with your lights and radio and wipers and all the other things in the car.

So the DC DC converter basically converts the DC voltage high voltage from the high voltage battery system down to 12 to 14 volts to charge the battery. So it keeps the electrical system going. It's an electronic alternator, much like you would, or serves the function of the alternator that you'd find in a normal internal combustion engine.

Mark: So the whole system is kaput because of one unit failing.

Bernie: It is. Yeah. It basically that the DC DC converters, doesn't operate or there's a failure of this type, it just basically won't even allow the car to start. So you're dead in the water. Unfortunately you know, I like to say the cowboy days, well cars are just gotten more and more complicated.

If you know, your alternator is dead, at least you could charge your battery up and drive it for a few miles. But not with this car. It's you fix it or you don't go anywhere.

Mark: So the DC DC converter, I happened to know as part of the inverter. Is that how that works?

Bernie: It is, yeah. It's all integrated inside the inverter.  And actually we'll just look at some pictures right now. 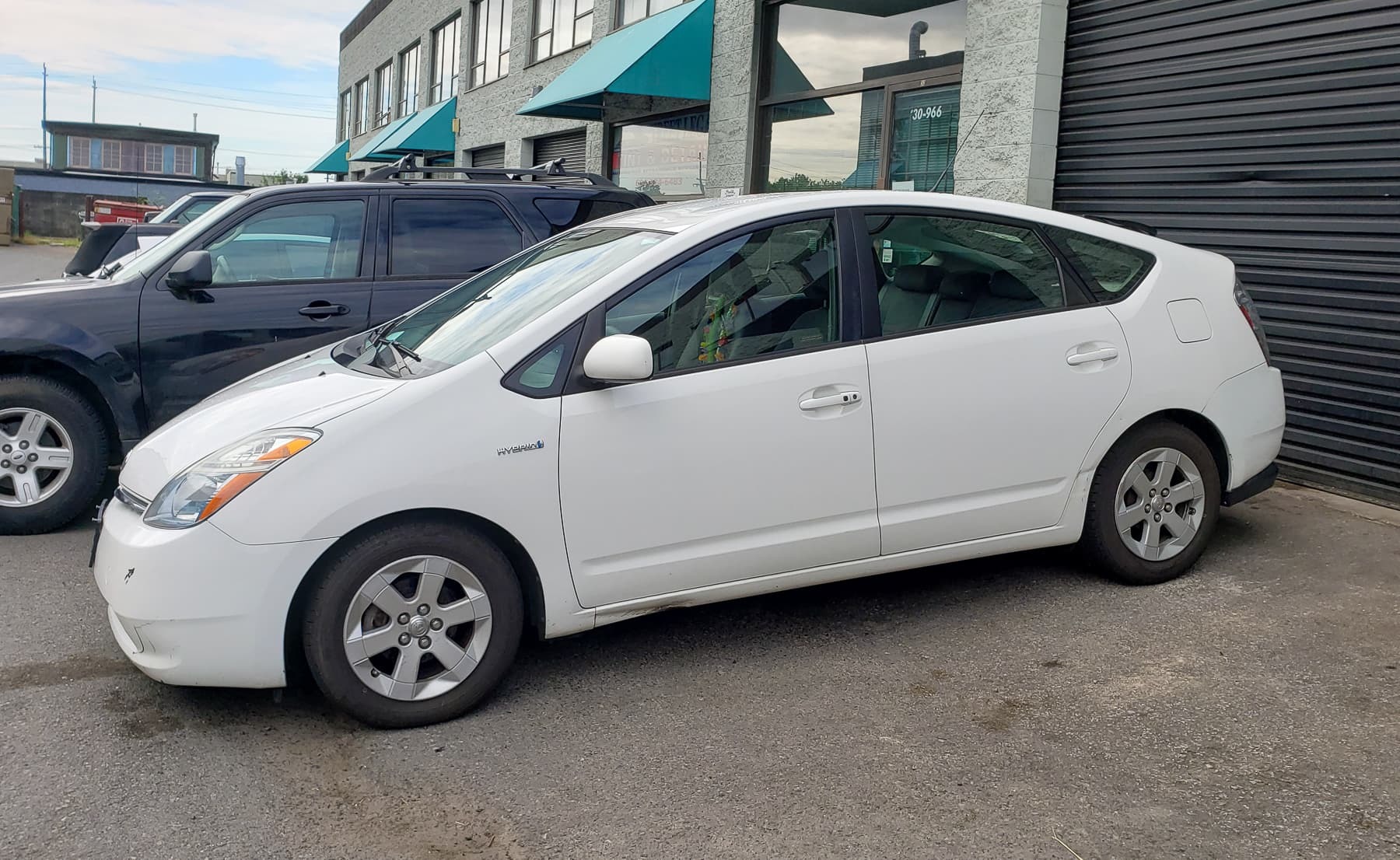 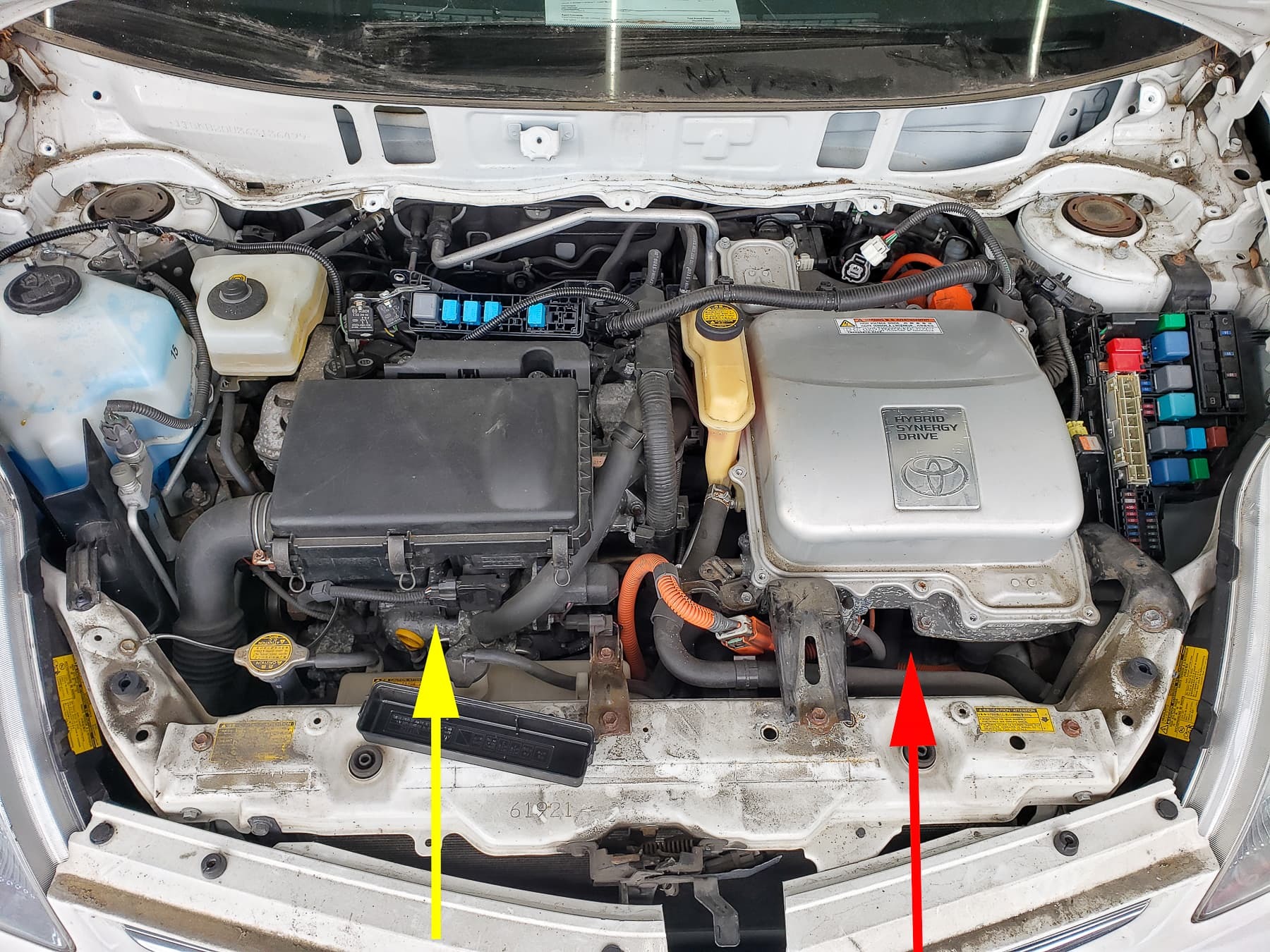 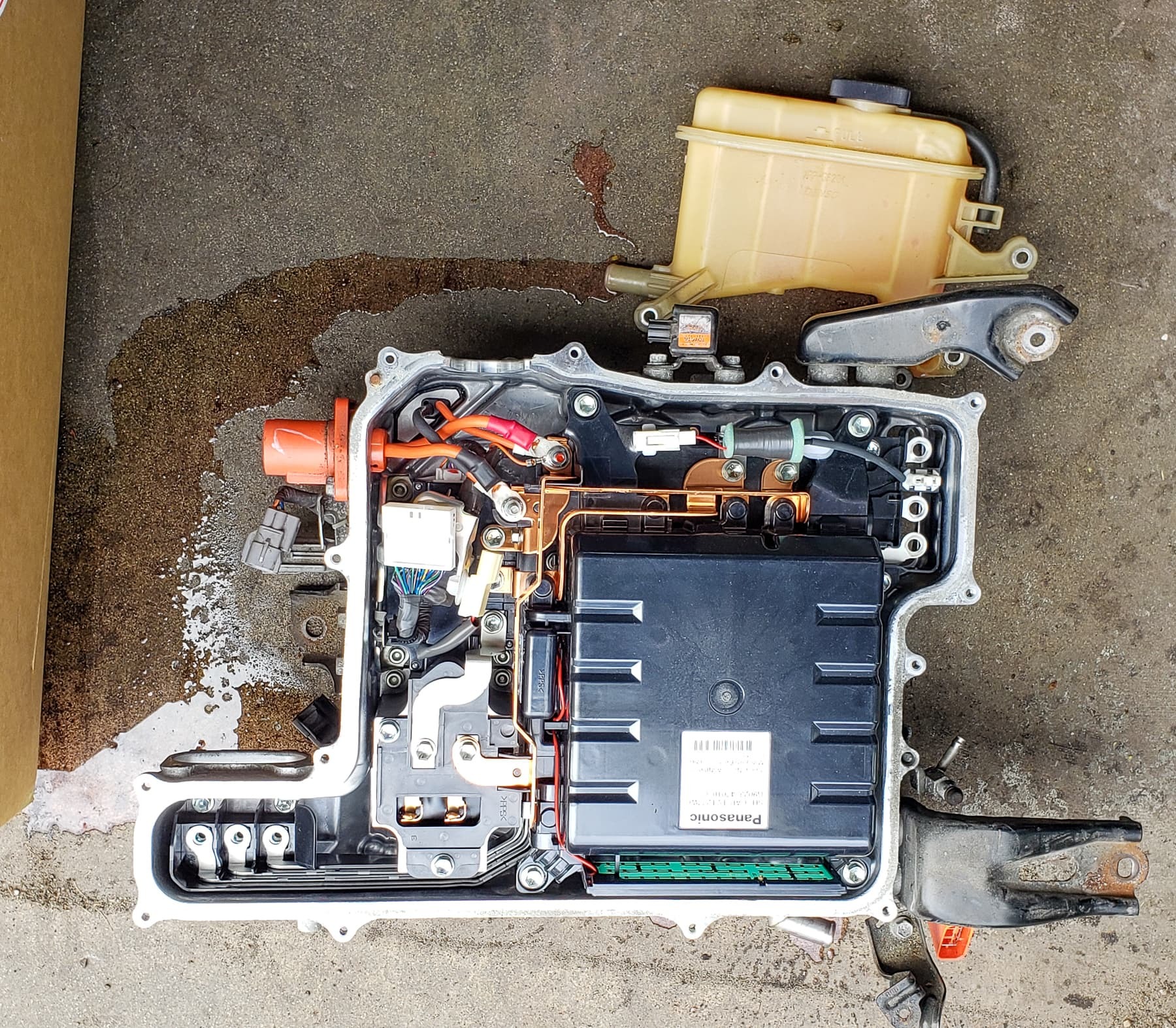 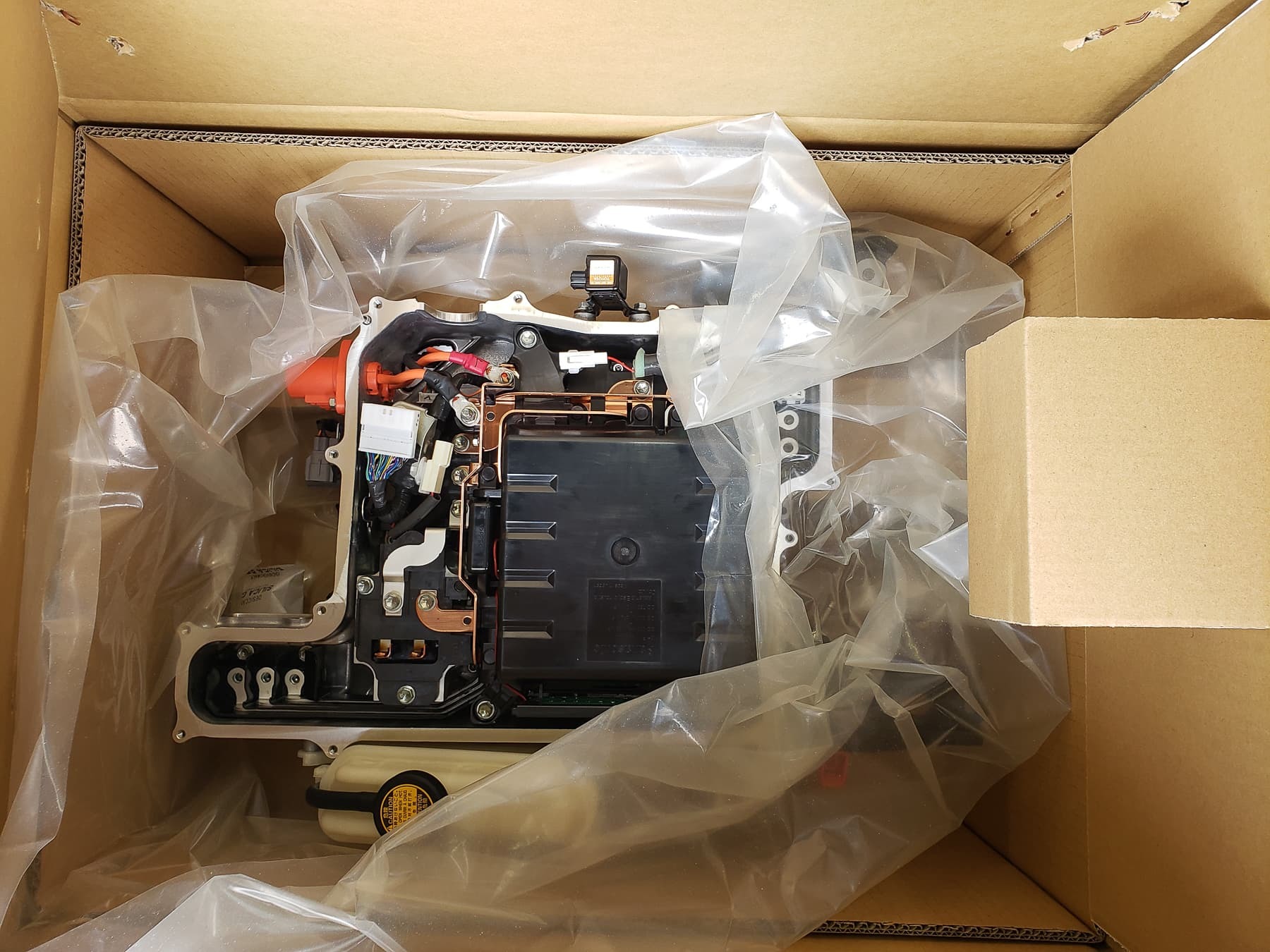 So, there is our 06 Prius. And let's have a look at the inverter. So here's an engine compartment view. So this red arrow here is actually pointing to the inverter. This sits on top of what would be the transmission is the motor generator units. And the internal combustion engine is located on this side where the yellow arrow is. So you'll notice too there's a couple of cooling systems. This one here is actually for the inverter. And this one here is for the internal combustion engine.

There's the old inverter removed from the vehicle. You can see that coolant tank that was part of it. That comes with the new inverter. Orange cables, any orange cables, these are all high voltage cables. There are a number of different spots where the cables from the motor generator are attached into the inverter. Items that are bolted in place. This is the top view of the inverter without cover off. It says hybrid synergy drive. This is what's underneath it. And of course this can be taken apart. There's many, many layers, but it's all electrical, electronic devices inside here. And finally, there's the new units sitting in a fresh box from Toyota, which is how the customer chose to fix the vehicle.

Mark: So what else does the inverter do?

Bernie: Well, the primary function of the inverter is to actually convert the DC voltage from the high voltage battery pack, to three phase AC voltage for the motors in the motor generator unit. There's two motor generators one of them primarily drives the vehicle.

And this all happens inside that box. It's kind of like a magic box, really pretty amazing how it all works. The DCDC converter is in there. So there's a conversion to convert that to 14 volts to charge the 12 volt electrical system.

Mark: So it sounds complicated and expensive.

Bernie: Well, it is complicated. These are things that we, as far as I know, I don't know anyone who fixes them. There's really two options for repairing it. There's buy a brand new one from Toyota or buy used one. The owner opted to go for a new one.

It is very expensive part. There's sort of three main components, you know, on the hybrid system on these vehicles. One is the inverter. The other is the high voltage battery in the other courses, the motor generator transmission type of unit. These are all very expensive components. Usually very reliable,  especially the inverters. I did present the option of a used one, which was very reasonably priced and you know, it's always a bit of a gamble, but Prius inverters are pretty reliable. So it would have been a good gamble, but she wanted to the new part  and the assurance that that would provide.

So once replaced, it'll likely, never go dead again, and for another, the car is 14 years old. It'll probably last 14 or much longer than that. So that's the way she chose to go.

Mark: How complex is it to repair or replace the inverter?

Bernie: Well of course there are safety concerns with the high voltage electrical system.

You've got to make it safe to work on. Once you do that, it's just matter of unbolting, a lot of electrical connectors and there's a cooling system involved. So it's just time to unbolt things and bolt things back together. Refill the cooling system, bleed it out properly. Then it just works. As long as the computers see everything they want to see, then the vehicle starts up.

Mark: How did the vehicle work after all the repairs?

Bernie: Well, it started up just fine. The moment we had the proper inverter, everything started fine.

We drove the vehicle, and there was an issue. The vehicle drove fine, but the warning lights came on on the dash. There's a triangular hybrid system warning light along with the check engine light that came on, which isn't surprising considering the vehicle sat for at least a year, and who knows how long before that?

The issue with that, we're going to talk about in our next podcast, because we've spent a lot of time talking about this inverter and if this was a TV show, it'd be a cliffhanger, but this is just car repair. We'll talk about that in the next podcast.

Mark: So there you go. If you need some service for your Prius in Vancouver, the guys to see are Pawlik Automotive. You can reach them at (604) 327-7112. To book your appointment - you gotta call and book ahead, they're still busy, they're rocking and rolling even through a pandemic!  Pawlik Automotive, you can check out the website: pawlikautomotive.com. We're on YouTube: Pawlik Auto Repair. Hundreds of videos in both places, all makes and models, all types of repairs.  Thanks really, we really appreciate leaving a review or just watching our crazy talks about fixing cars here. And thanks Bernie.