Mark: So all wheel drive system on a Volvo, what was going on with this vehicle?

Bernie: So first thing, hookup a scan tool to the vehicle computers. Did a full system scan. There was two codes in the all wheel drive module or rear differential. I can't remember which term they use on this particular vehicle, but there's two codes, one for a communication issue with the differential module and one for a pump, issue with the pump. So we did some testing on the system as much as we could. Under the vehicle, found that the pump was definitely bad. And that was our first item to replace.

Mark: So you replaced the pump. Did you have to do anything else after that?

Bernie: So, what we did is we replaced the pump along with the pump, we also replaced the filter and service the fluid. I mean, some of the fluid had to come out anyways, but it's a good idea to service the fluid once in a while in these systems because it's kind of a critical part of the system to use the right fluid. So we serviced the fluid, the pump, the filter tested it all out and there were still issues.

Mark: So what was the next step?

Bernie: Yeah, next step, so we rescan it. There's still a communication error code. So just did a little further testing on the wiring to the module to make sure there was proper power, ground, communication, circuits, that sort of thing. It was all good. So at that point there's really only two things left. I mean, the most likely the module, possible issue with the actual clutch packs, but not very likely considering the code is a communication code. So we proceeded to have the module repaired and replaced.

Mark: So what's involved in replacing the module?

Bernie: Well, labour wise it's pretty simple. It bolts onto the side of the engine, not the side of the engine, sorry, the side of the differential. And I'll get some pictures up in a second, but there's really a couple of options available for replacement. There's brand new from the Volvo dealer. There's used modules if one can find them and also having them rebuilt. We have a company that rebuilds a lot of electronic components. And they actually do a really good job in these things. They do a lot of them, so I'll just get some pictures here. So we went with the rebuilt option. 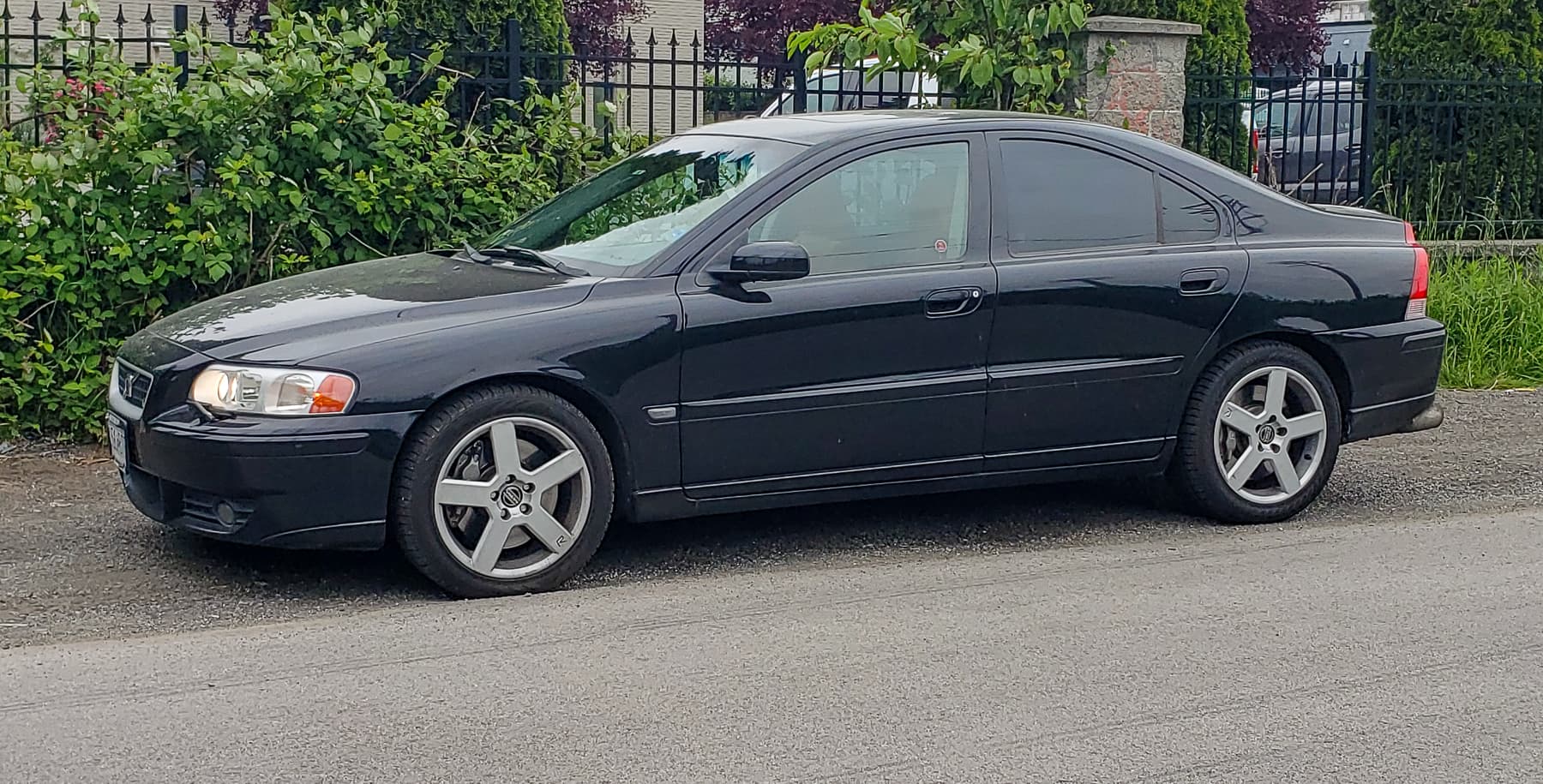 There's the module. This is the rebuilt unit. The nice thing about these rebuilts is they come programmed. You know, this an issue if you buy a used one, it may need to be reprogrammed to the vehicle. Modern vehicles they all have to be, modules need to be programmed so the computers connect with each other. I don't know why such complexity, but for some reason they do it. And it just makes repairs more fiddly inexpensive. But these come reprogrammed, which is a good thing. If you're buying a new one from Volvo or a used unit, you'd probably have to do the same thing. 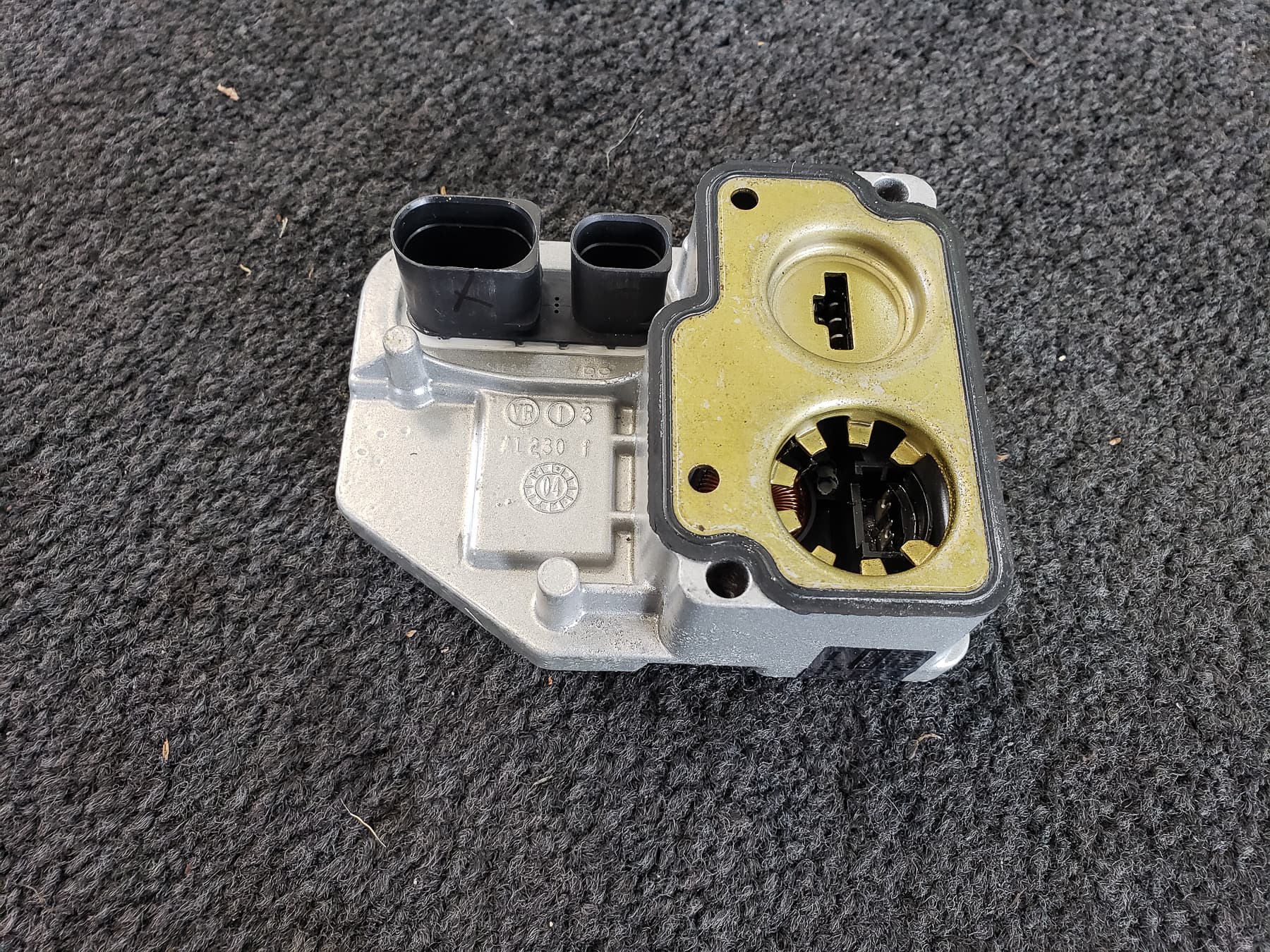 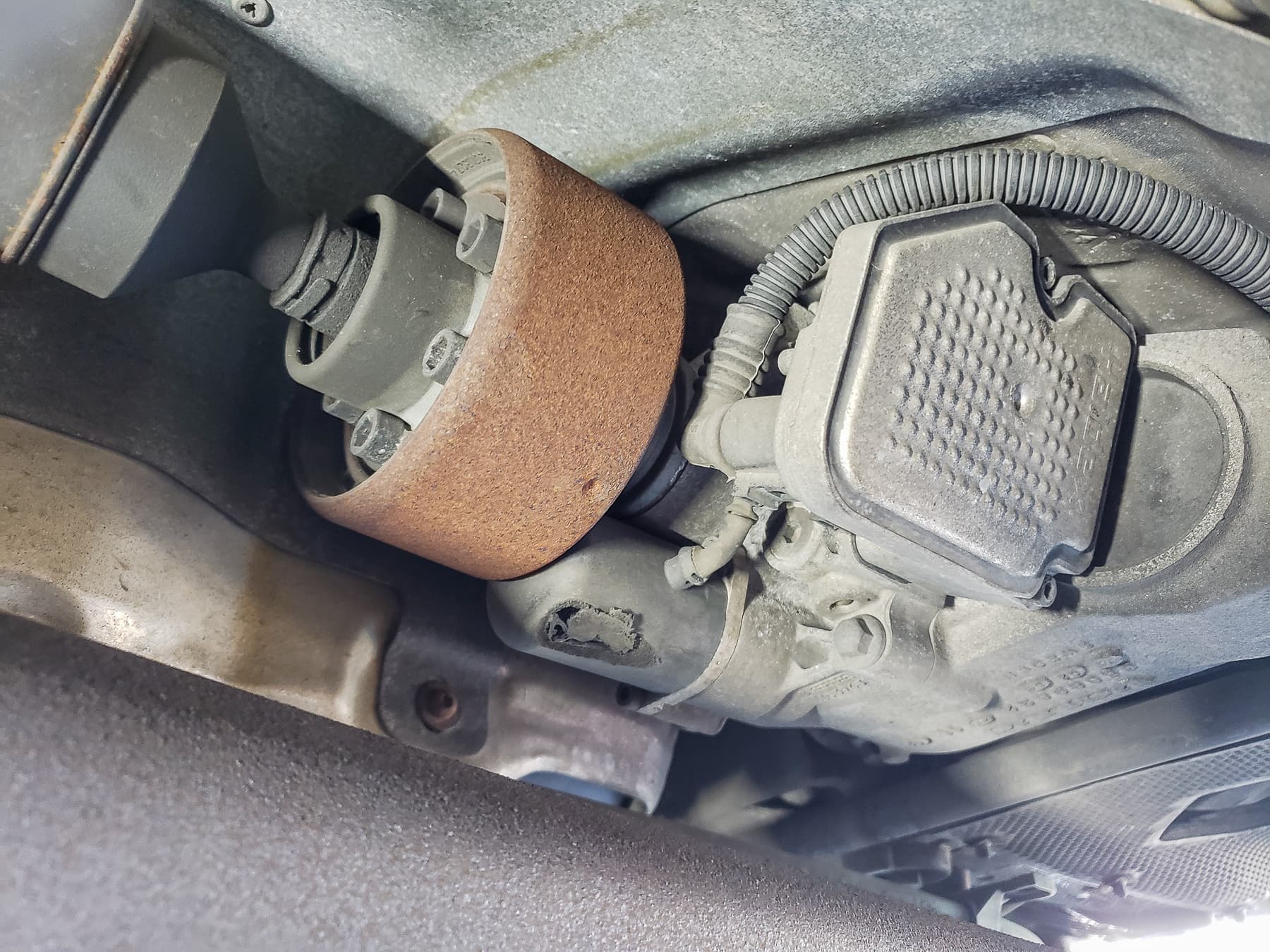 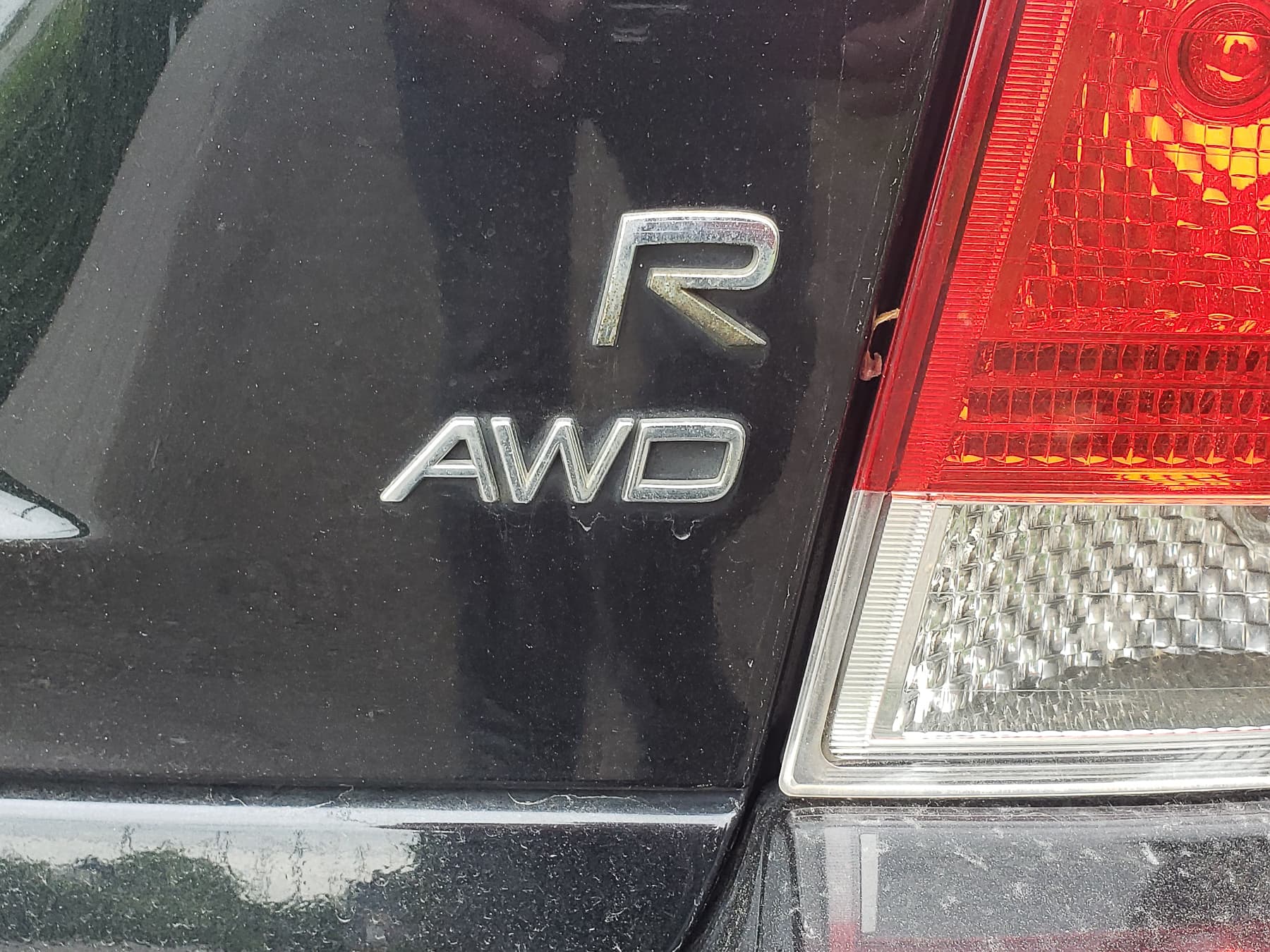 Anyways, here's a view of the the differential unit. This is the Haldex unit here. And this is the module here, kind of looking at the other side of it, from what that picture was. Pump's located here. This is the drive shaft that comes from the front of the vehicle, hooks up with this coupler here. And then inside this area, there's all the clutch packs that kind of do the all wheel drive operations. So there's our picture show for the day. But yeah, the module basically is quite simple. It just bolts onto the side with some electrical connectors.

Mark: And how did everything work once the module was replaced?

Bernie: Perfect. No warning lights were all out. No more codes. All wheel drive system worked great.

Mark: So, is there anything unique about this Haldex all wheel drive system?

Bernie: They actually use it on a number of different European vehicles. This system is used on Land Rover LR2s as well. There's some Volkswagens that have Haldex's. But this type I mean, what's unique about it. It uses electronics to control the slippage between the front and rear axles, which is important for, you know, good driving comfort, and then also good you know, differential lock up when you need it in slippery conditions.

Mark: So is this a typical failure in these units at some point in their life?

Bernie: You know, some do. I mean the modules do fail. We've replaced all sorts of bits and pieces on these, like modules pumps, they all tend to have problems. But you know, there are many Volvo models that don't have problems at all. So it's not sort of a guaranteed failure if you own one of these, but you may run into one or two of these items. And sometimes, you know, the pump will be bad and it'll actually take the module out. So you know, it's often better, even though we did this in a couple of sequences, that if the module is bad, it's often a good idea to replace the pump at the same time, because it can cause a module to go. And it would be a shame to put a module in and have it blow out because the pump was not replaced. It's drawing too much current or something like that.

Mark: And it works really well as far as the four wheel drive system.

Bernie: Yeah, it does. For sure. I mean, you can't really tell you have it. If everything's working well you can't really tell it's a four wheel drive. If you've driven any, I always think of like American trucks or like a Jeep where you put it in four low and everything's locked in, you go around the corner on pavement and the wheel start hopping and grinding and binding. So, you know, you don't get any of that kind of thing on this sort of vehicle. So you can be driving in four wheel drive all the time, but it controls things. So it's comfortable to drive.

Mark: If you're looking for service for your Volvo in Vancouver, they work on a lot of them. Pawlik Automotive. You can reach them at (604) 327-7112. To book your appointment, you have to call and book ahead, or you can book online at pawlikautomotive.com. They'll call and check and talk to you. Find out exactly what the problem might or might not be. Thanks so much for watching. We really appreciate it. You can check out our YouTube channel. Pawlik Auto Repair. Thousands of videos on there of all makes and models, types of repairs. Thanks Bernie.