Mark: Hi, it's Mark from Top Local. I'm here with Bernie Pawlik, Pawlik Automotive in Vancouver. Vancouver's best auto service experience. 22 time winners of Best Auto Repair in Vancouver as voted by their customers. And we're talking cars. How are you doing Bernie?

Mark: So 2008 Mercedes Sprinter that had a rear axle bearing problem. What was going on with this van?

Bernie: Well, when the vehicle was brought in for some service and, driving the vehicle down the road, there was an exceptionally loud noise coming from the rear of the vehicle. Doing a little diagnosis and testing. We pretty quickly determined it was the right rear axle bearing that was making the noise. Extremely loud.

Mark: So what was involved in replacing this axle bearing?

Bernie: Yeah. So this is interesting on Mercedes, actually replacing this axle bearing, there's a few ways just to kind of go over. It's a solid rear differential. So, usually, you can either remove the axle shaft by one of a couple of ways. You normally press the bearing on and off the axle shaft.

But this is kind of unique on this Mercedes, or different. The axle is replaced as a complete assembly. You can't buy a separate bearing or hub for this vehicle. You have to buy the whole axle shaft. I wanna just get into some pictures right now.

Mark: So why did they do that way?

Bernie: I don't really know for sure why they chose to do it that way, but we'll just go over a couple of pictures here. 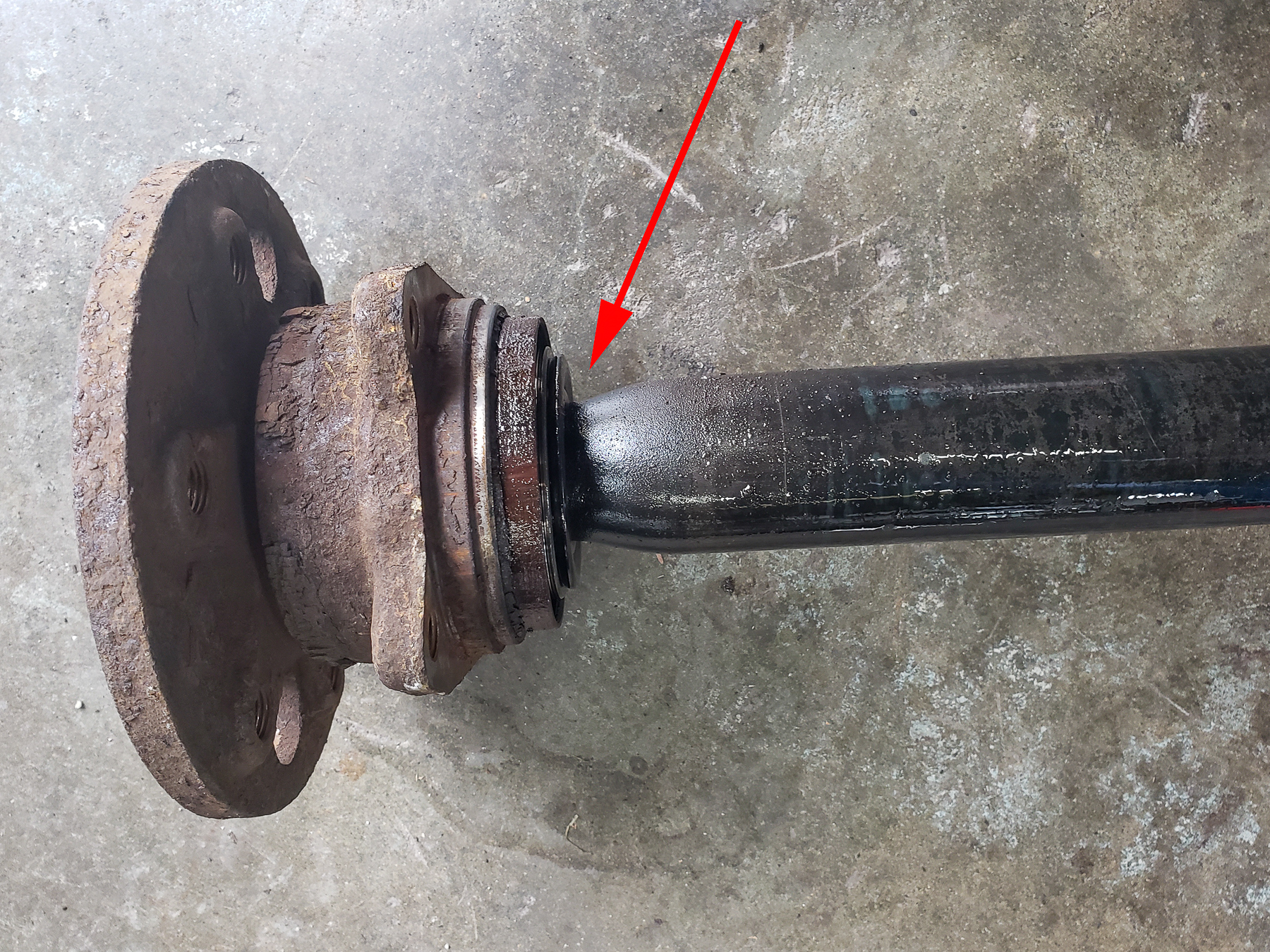 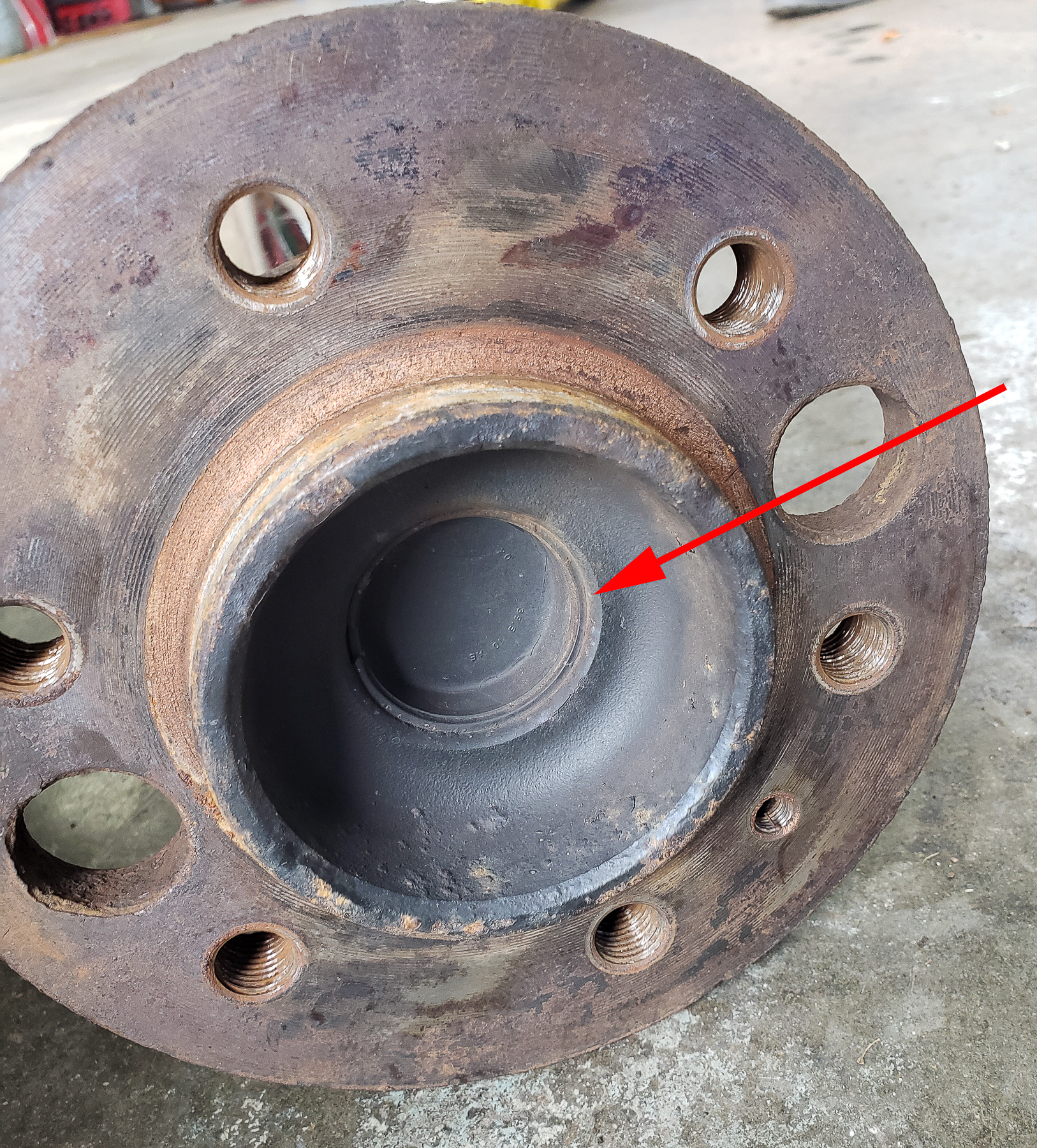 So here's the axle removed from the vehicle. Now you can see this part here, these splines, this is what slips into the gears and the differential, and it basically drives the axle and the axle bearing, the part that was worn out and making noise sits out here.

Now I have another picture here that illustrates this a little better. So that's the general look. If you look at this close up, you can see this shaft is extremely fat and it goes skinny down here. And now normally, for these type of bearing, a lot of axle bearings, you can press this part off the vehicle. It's often a fair bit of work, but with a hydraulic press, you can press the bearing off. But interestingly enough, there's no way you could do that on this bearing because the axle shaft is actually larger than the bearing shaft diameter. So they've made it smaller at the outer end.

And as a final picture, you know, there is a possibility I didn't remove this cap because there's no sense because you can't buy the bearing separately anyways, in the aftermarket or from Mercedes but likely if you pulled this cap out, there might be a big bolt in there that you could actually unbolt the actual shaft from the bearing and hub assembly and, change it from there. So that's our little picture show.

Mark: So is that a unique design?

Bernie: Well, this is unique. To have to replace the whole axle, this is the only vehicle I've run across where have to replace a whole axle, just to get the bearing. But this design of that little cup I showed at the end with the bolt, a lot of Jeeps, have a design where you can actually change that hub and bearing, I'll go back to the pictures again.

You can change the hub and bearing like you can actually, this part will actually pull off the actual there's a little bolt in the middle, kind of similar to this. I, what I imagine is, and the actual shaft will slide off of that hub and bearing so on a lot of Jeep models, but I think some Dodge pickups as well, you can have this, you can replace this separately.

Why Mercedes didn't do it? I don't know. You know, just how, how, how they roll. So, how about the longevity of this? Does this part fail fairly often on sprinter van? No, they, they last a long time. We work in a lot of sprinters. This is the first one we've changed, you know, obviously not, No, not a foolproof item, but they do tend to last a long time.

So, as you can imagine, replacing a whole axle and bearing is probably pretty expensive and it is, it's only seems to be only available from Mercedes. We weren't able to find it after market. A solution, but, we did get a used one for the customer, which has about half the price of the new one. And it actually worked really well.

We can, you can easily test the bearing beforehand by rotating it. And, it, it's pretty obvious. I'll actually, I have one more thing to share here, and that is, that is a video of, of this bearing hair. So just bear with me a second and I'll, I'll, screen-share the, the, Share this video. So just, if you listen, you should be able to hear the sound of this bearing as I spin it,

be able to hear that barely. We'll see if we can crank the volume of that up in the, in the, After post production process. But anyways, that, that is a sound of an exceptionally badly worn bearing. So they used replacement part. We had, first of all, it wasn't nearly as rusty as this. And second of all, even when you turn it, you can, you can, it takes a fair bit of force to act by hand to actually rotate it and turn it.

So, you know, it's, it's obvious when it, when it's working properly.

So. this is just the shaft to act. So this is not changing the differential though, right? No, no. The rest of the differential is all inside. you know, it's further in, there's a lot more work involved, to do that. So, I mean, on, on one note, you know, actual labor portion of this job is not too difficult because you can just pull the axle out.

You don't have to press the bearing on and off, which is typical of this kind of design. And that can be time consuming and expensive as well. So, it's kind of like a, almost a plug and play operation, but, there are other factors as well, just to put in there that the a there's an abs wheel speed sensor that has to be removed.

In order to change this, this bearing, and those will seize in there frequently. This one actually good. This one actually did season the bore and needed to be replaced as well. So, you know, sometimes you'll get lucky and you'll be able to pull it out, but other times it, it won't come out and you'll have to replace that part too.

So that's just another added, part to it. And how often does one axle bearing goal mean that you've got to change both of them? You know, these are the kind of thing where they're completely independent parts. So if one's warned, we don't normally just change the other side. Just change it as you go, say the same with a lot of, you know, hub and wheel bearing assembly that you find in it.

I say modern cars. I mean, they've been around for decades now, but usually, usually if one's worn, it doesn't mean the other, no, one's going to be worn out. Sometimes you can change one. and the other ones won't wear out for another 10 years. So, it's just basically just replace it one at a time.

There's no, no cost savings whatsoever to change. both of them. And you work on a lot of sprinters, as you mentioned, how are they for reliability? They're pretty good. You know, we've talked a lot about them. There's other podcasts. I mean, it's got the three leader, a lot of them have the three liter Mercedes diesel.

It has a, you know, a number of issues we, that I won't get into now, but they're, they do, they do have their issues. but overall they're, they're a good van and they they're very popular because of the size and the, the dimensions, no breaks, breaks do wear out on them over time, but they're, you know, not, Not abnormally fast.

but generally speaking, they're a good, reliable van. You, you pay a lot of money for them, but they're, you know, they're very useful for what they do for the size and what you can pack into them. Plus they're economical to run with, you know, with the, with the diesel, even though there are problems and issues, you know, they certainly get incredibly good fuel economy.

So if you have a Sprinter in Vancouver or any kind of Mercedes product, or even the Dodge version of that, you can call Pawlik Automotive and get them to service those vehicles. They're experts in it. (604) 367-7112 to book your appointment, you got to call and book ahead. They're always busy.

Check out the website, pawlikautomotive.com hundreds, seriously, hundreds and hundreds of videos and podcasts and articles on all makes and models of repairs, types of repairs. Pawlik Auto Repair is the YouTube channel. You can check out our videos, that are again, seven years worth of doing this every week. Lots of them.

And of course, thanks so much for listening to the podcast. We really appreciate it. Leave us a review wherever you're picking up your podcasts. And thank you, Bernie.

Thank you, Mark. And thanks for watching.