Mark: Hi, it's Mark from Top Local. I'm here with Bernie Pawlik, Pawlik Automotive in Vancouver. Vancouver's best auto service experience. 24 time winners, best auto repair in Vancouver as voted by their customers. And we're talking about a Toyota Highlander. There can only be one. How you doing Bernie?

Mark: So this is a 2016 hybrid. What was going on with this Toyota?

Bernie: The owner had some concerns with the brakes. They were making some noises and it didn't quite feel right. So he brought it in for us to have to look at the brakes.

Mark: So what kind of inspections do you do to check what's going on with the brakes?

Bernie: We have a standard brake inspection that we do for anyone who needs the brakes looked at. And so that entails of course, a road test as a first thing to see if there's any noises, see how the brakes feel. Of course, if the pedal's straight to the floor, and there are no brakes, we don't go on the road test, but that's not very common, fortunately. Because then the road test happens after we do the hoist inspection. So we go on a road test then do a hoist inspection. We remove all the wheels, look at the brakes in detail, measure the thickness of the brake pads, the rotors, test to make sure that things are moving. Look for leaks, inspect the brake fluid, look at the hoses, lines and all those kinds of things. And it depends from vehicle to vehicle. I mean, on an old car, that's perhaps from, you know, more salt prone areas we'll look at a little more detailed the brake lines than we would on say like a 2016 Highlander that's, you know, lived in British Columbia, like Vancouver area, all its life. It's only five years old.

Mark: What kind of stuff did you find?

Bernie: Yeah, so on the road test, we noted that there's some grinding sounds. The brakes felt like they're shaking a bit, possibly warped rotors. We found on the front brakes one side of the brake pads were worn down to two millimetres, which is basically worn out. And the other side, they were seven millimetres, which is an enormous difference. I mean, seven millimetres is, you know,  still has 60% of the brake pad life left. Two millimetres is basically worn out. On the rears, they were down to about the four to five range, so almost worn out, but then the rotors were also pretty rusty.

I mean, the brakes looked like they'd probably been on here for a long time. Let's get into some pictures here and we can have a look at what we found.

So there's the Highlander hybrid. 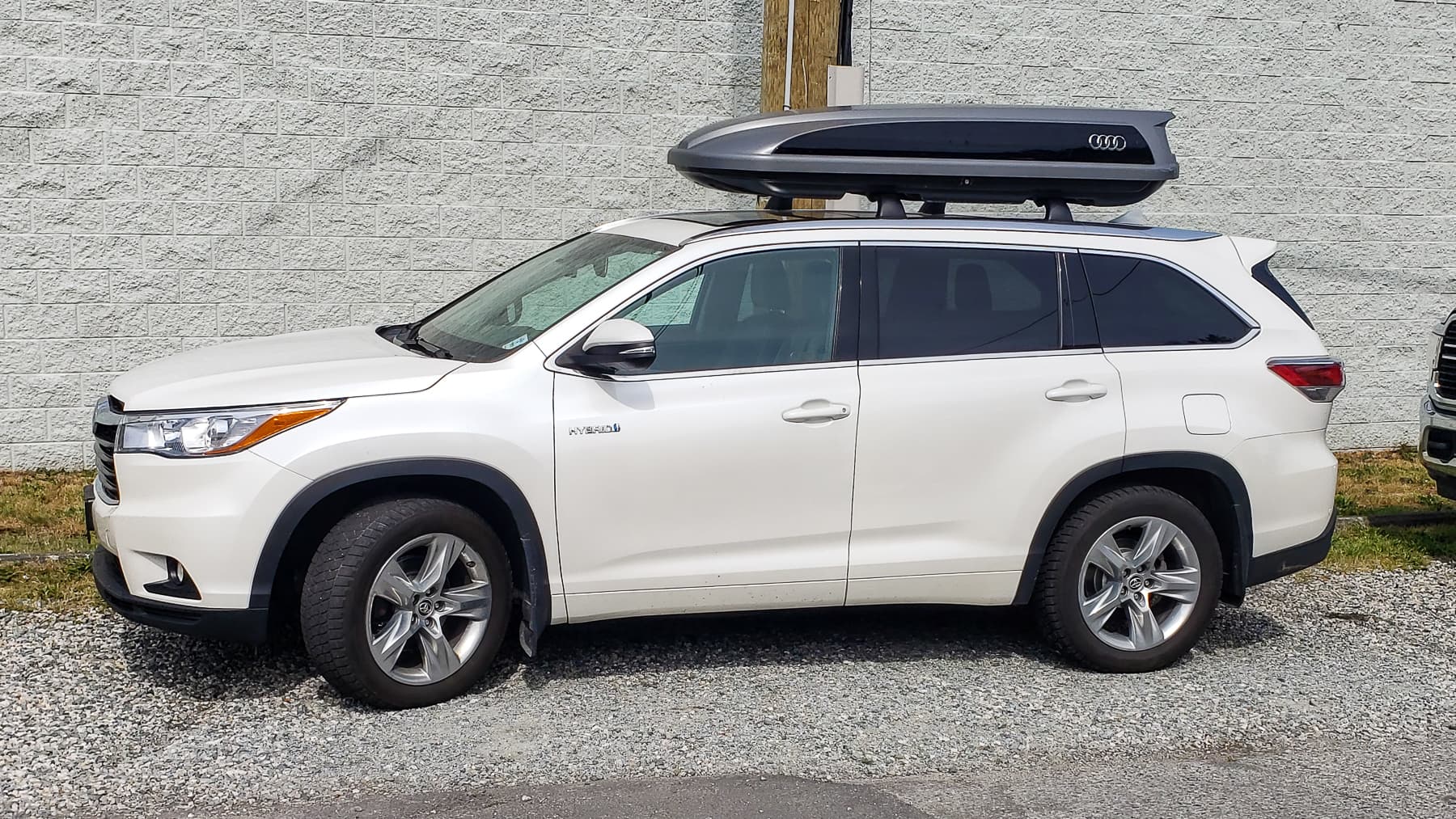 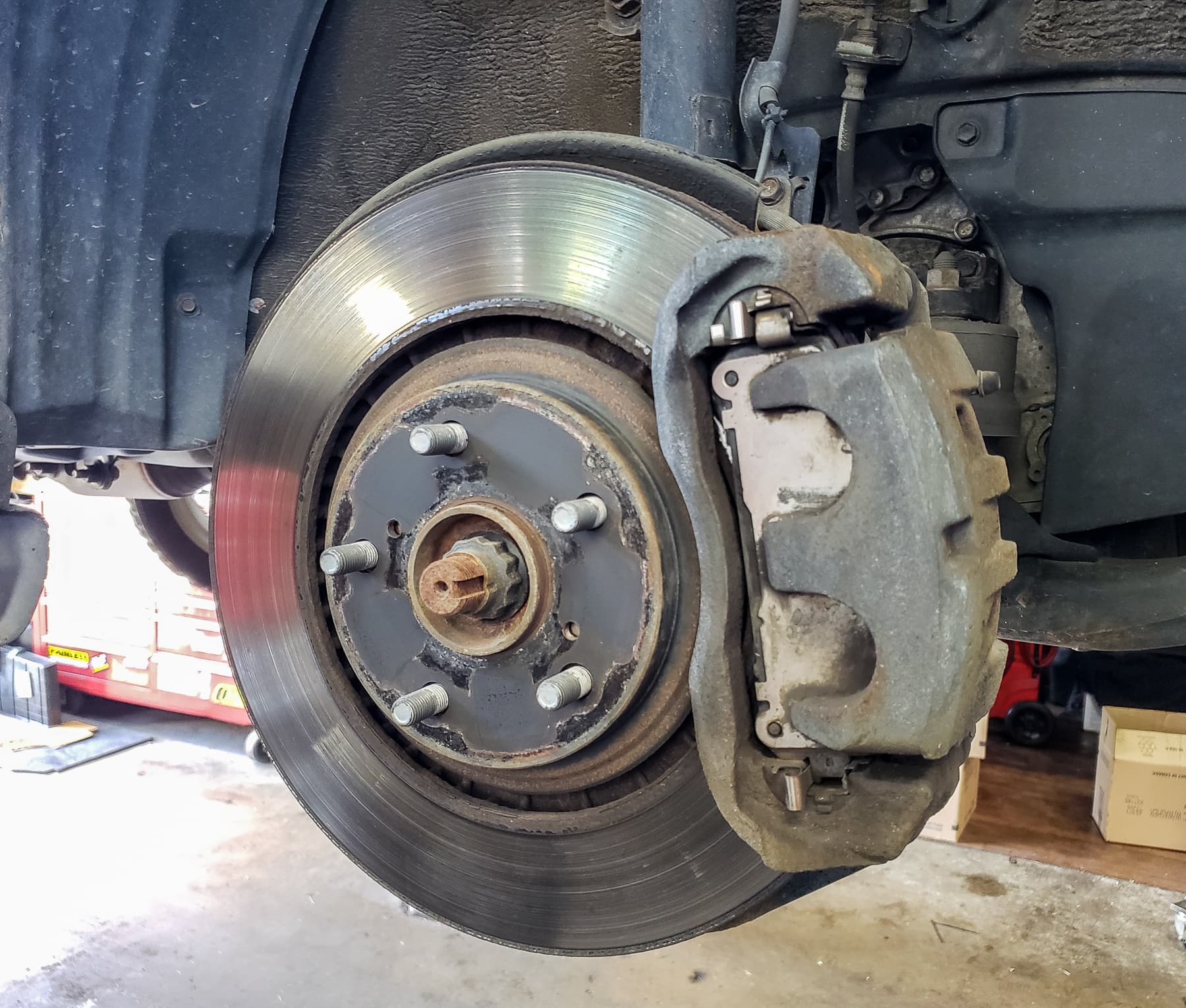 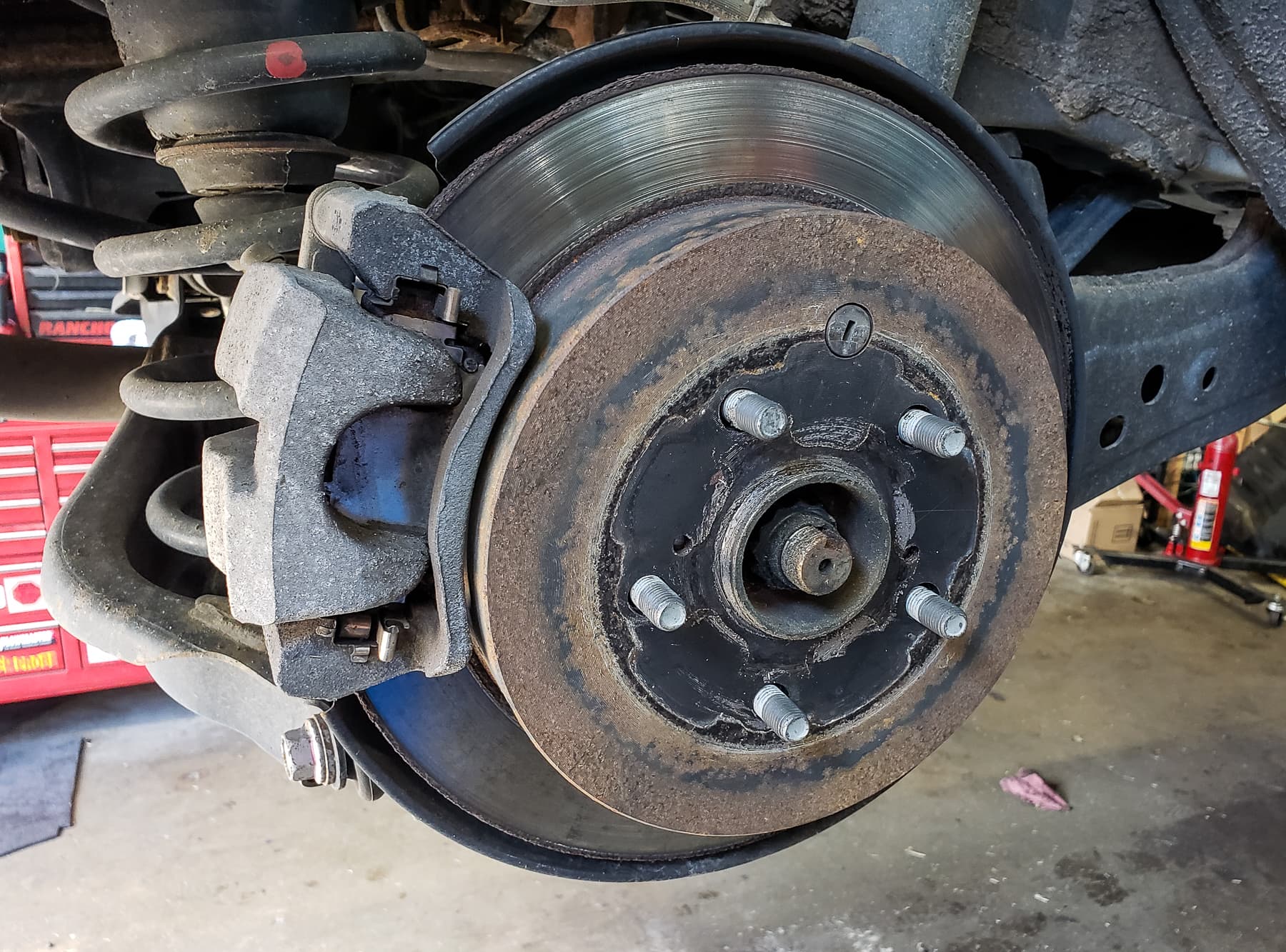 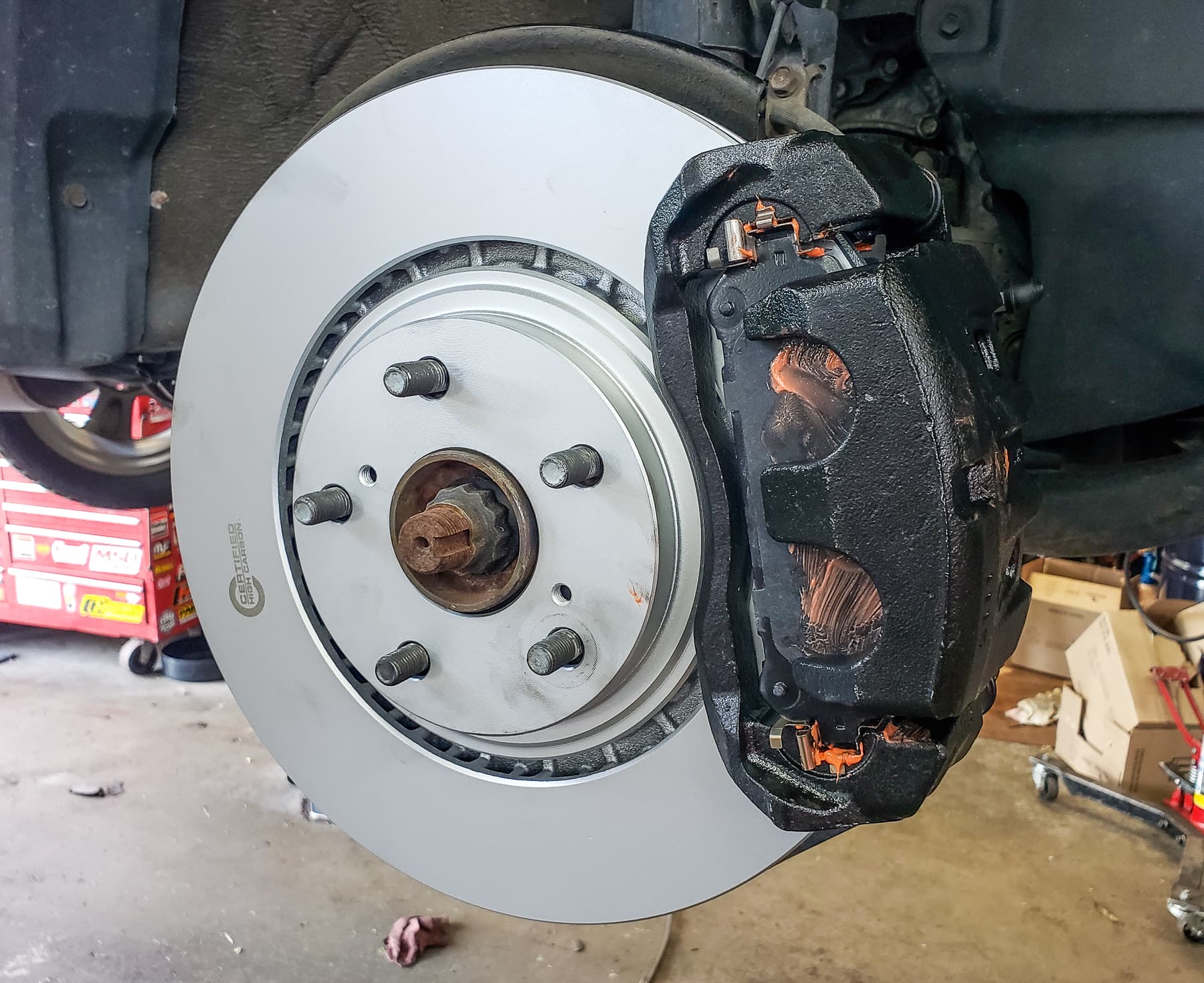 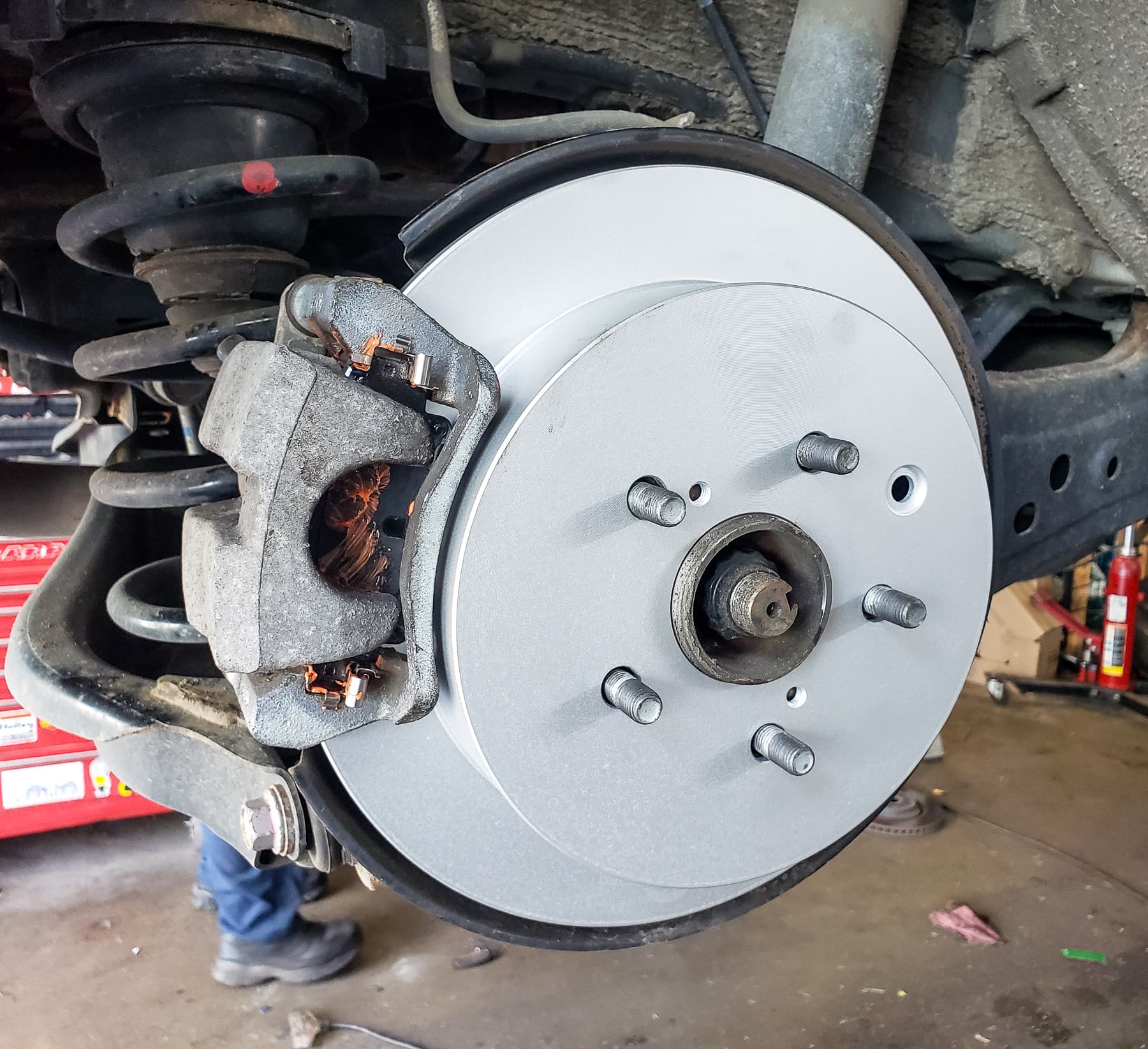 The vehicle as far as the brakes, let's have a look at some of the old brakes. This is a front brake. Not really looking too much in the pads, but you can see the edges of the rotors are starting to rust, which is kind of normal wear and tear after a while. It indicates that these brakes have been on the car for a long time. Unless of course you're in somewhere climates like rustier than then they get worse.

And again, you can see here that the edges of the rotors are very rusted, which indicates they'd been on long time. Not severely rusted though, if in certain areas of the country and we even see it here, sometimes the actual surface will start getting badly rusted and you know, that's definitely not a good thing, but you know, easily replaced.

So just looking at what we repaired, new calipers, rotors, pads in the front you can see everything's nice and clean and fresh services. We lubricate everything with the special brake lubricant, which keeps squeaks and squeals to a minimum, and just keeps everything moving to keep maximize the life. And the rear brakes, did pads and rotors, caliper was okay. So we left that. So I'm kind of jumping ahead to the repairs we did. But we can talk about that some more in detail. So there's our picture show.

Mark: So you replaced everything basically in the brakes?

Bernie: We did. Yeah. So what causes the breaks to be seven millimetres on one side and two on the other, it's basically a seized caliper, 99% of the time you can get a brake hose where, sometimes a brake hose will develop a blockage and it'll you know, restrict the flow to one direction. So that can happen.

But on a 2016, basically a five-year vehicle, you'd never find that. It's only something that would happen on a, maybe 10 or 20 year old vehicle, but never on something that's five years old. It would be very unusual. So basically the caliper was seized on one side, causing the brakes to wear out much quicker and on the rear, as I mentioned, there's like four to five millimetres.

I mean one or two millimetre difference is no big deal. We test the calipers when we do the inspection and make sure that everything's moving freely. So the rear brake calipers were serviceable and all good.

Mark: So why would that caliper freeze on and cause that one brake basically to do most of the work.

Bernie: Well, a couple of things. You can get corrosion, like moisture that intrudes inside the caliper piston, and that causes it to rust. And then seize up. Also the calipers have a sliding portion and they usually have pins that allow the caliper to slide back and forth. Some brake calipers have pistons on the outside and inside, and they don't have any slider pins. So any sticking in that area would either be a pad stuck where the pad slides, I call them pad sliders, the pad sliding area. But there's a few things.

The pins can seize up as well. On this type of caliper, it has an inner piston and pins that allow it to slide. So those seize up as well. And you know, they can be serviced and cleaned. That's a little easier to fix, but once they get really severe, it's better just to change the whole caliper.

Mark: So hybrid vehicles because of the recharge, I guess depends on kind of hybrid whether it's recharging or not, or do they all recharge?

Bernie: Most of them, yeah. Regenerative braking. I mean, Toyota, certainly do.

Mark: So that brake, because of the regeneration, the brakes aren't being used as much, shouldn't these brakes last a lot longer than this?

Bernie: Well, you'd think so. I mean, five years is not that old, but this vehicle does have 145,000 kilometres. So that's actually a fair bit of mileage. So I assume looking at these brakes that they were original and that kind of makes sense for hybrid, 145 Ks is pretty good. But you could still get 200. I mean, that's why taxis, they love Prius's because they're reliable. And the brakes last a long time. Like a typical taxi, they'd only get three months out of a set of brakes on a conventional vehicle. Three months on, you know, most people complain when they have to do their brakes every three or four years but on a taxi it's like every three months, but that takes a car off the road for a few hours. So, I mean, with a Prius, they can get a year out of a set of brakes. So that's a big, it's an enormous change. So, yeah, I mean, I'd say 145 Ks is a pretty good amount of time. And had this caliper no seized, these brakes probably would have lasted substantially longer.

Mark: Right. Is there anything that a Highlander or a vehicle owner can do to maximize their brake life?

Bernie: Yeah, absolutely. Having the brakes serviced every couple of years on a vehicle like this is really critical, especially on a hybrid, because again, the brake pads lasts a long time. You can do a brake inspection after a year or two and go, oh, well, there's still like, you know, 10 millimetres left on the front brake pads. A couple of years later you look and there's like nine and you know, they're barely wearing, but it's a good idea to take them apart. Clean them lubricated with that type of lube we use, take the pad slider pins out, clean and lubricate everything. That keeps the breaks lasting a lot longer.

And if he did that kind of service, you'd probably easily get 200,000 or at least a hundred and probably another 50,000 out of a vehicle like this. Of course, you know, the edge rust on those rotors, you can't really do a lot about that. I mean, you could machine them, but it doesn't really make a lot of sense to do that. You're kind of taking material off the brakes and, you know, as long as they're not grinding and making weird noises, I would probably just service them every year or two. And you should be fine.

Yeah. So how are Toyota Highlander hybrids for reliability?

They're legendary. Yeah, no, they're awesome. I think they're, older Highlanders did have some issues with inverters. I mean, this is a 2016 as much newer than, you know, I'm thinking like, oh, eight, seven, you know, like older. This is a newer generation. I mean, that far as I know, there's no problems with them. You know, a 145 Ks out of a set of brakes is pretty good. You know, it's a good vehicle.  I can't find any fault with it. Excellent.

Mark: So, if you're looking for service for your hybrid or your EV or your Toyota, or your Highlander, in Vancouver, the guys to call Pawlik Automotive. You can reach them at 604-327-7112 to book your appointment, you have to call and book ahead. They're busy. Check out the website. You can book online there. They'll get back to you. They'll find out exactly what's going on. Be ready for you when you show up. Pawlikautomotive.com. Of course, there's our YouTube channel, hundreds of videos on there all makes and models and types of repairs. Got nine years worth of videos on there. Pawlik Auto Repair. You can search for that there. Thank you so much for listening. We appreciate it. Bernie, thank you.