Mark: So today's victim is a 2016 Volvo XC90 that had a coolant pipe problem. What was going on with this vehicle?

Bernie: So the owner came to our shop. He'd sprung a coolant leak. The engine was running a little hot and that's why the car came in.

Mark: So how do you go about diagnosing that kind of a leak?

Bernie: Well, first start, of course, is a visual inspection. Look under the hood, under the vehicle to see what we can see. It was evident that we could see some coolant dripping, sort of between the engine and transmission area. And from there we do a cooling system pressure test where it was pretty evident there was some coolant spraying out of a pipe that's sort of located under the intake manifold. I guess I'd call it a coolant bypass pipe, anyways there was a leak from there. So that's what was wrong with the vehicle.

Mark: So what's involved with this repair?

Bernie: Well let's just get into some pictures and we'll talk about what's involved in the repair. So there is our 2016 XC90. 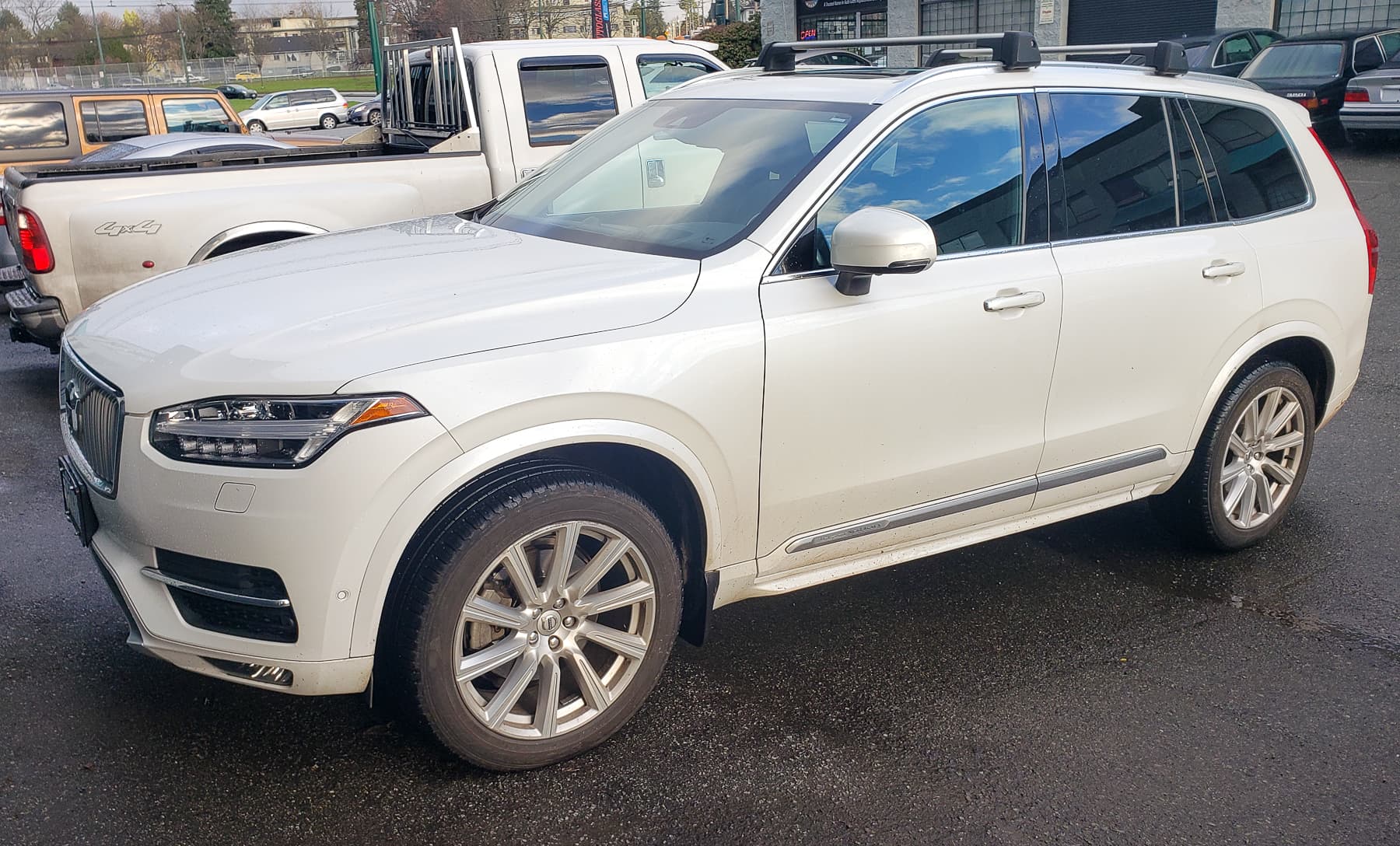 This is the second generation car. We'll talk about this in a minute just go a couple more pictures.

So here's the engine. It's a two litre engine. 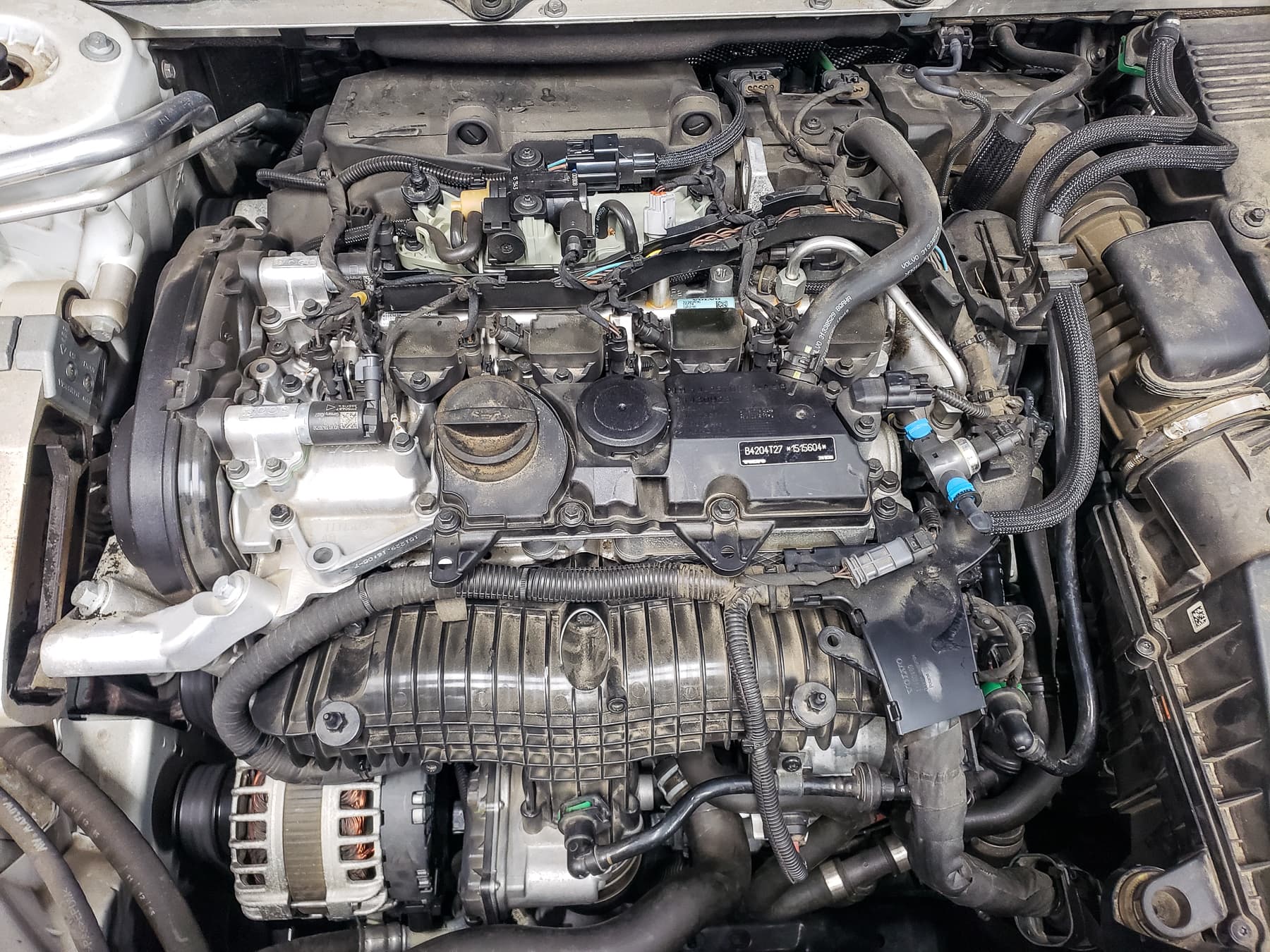 The coolant pipe that we replaced is located, if you just follow this mouse pointer kind of underneath this area here. So what was involved is actually removing the intake manifold and the air intake box and so on, to access the pipe. And from there, once everything is removed, it's a pretty simple job, but of course it's the matter of getting everything out of the way to access the pipe. So that's basically it was involved. I mean, it's just few hours labor to take it apart and put it back together. 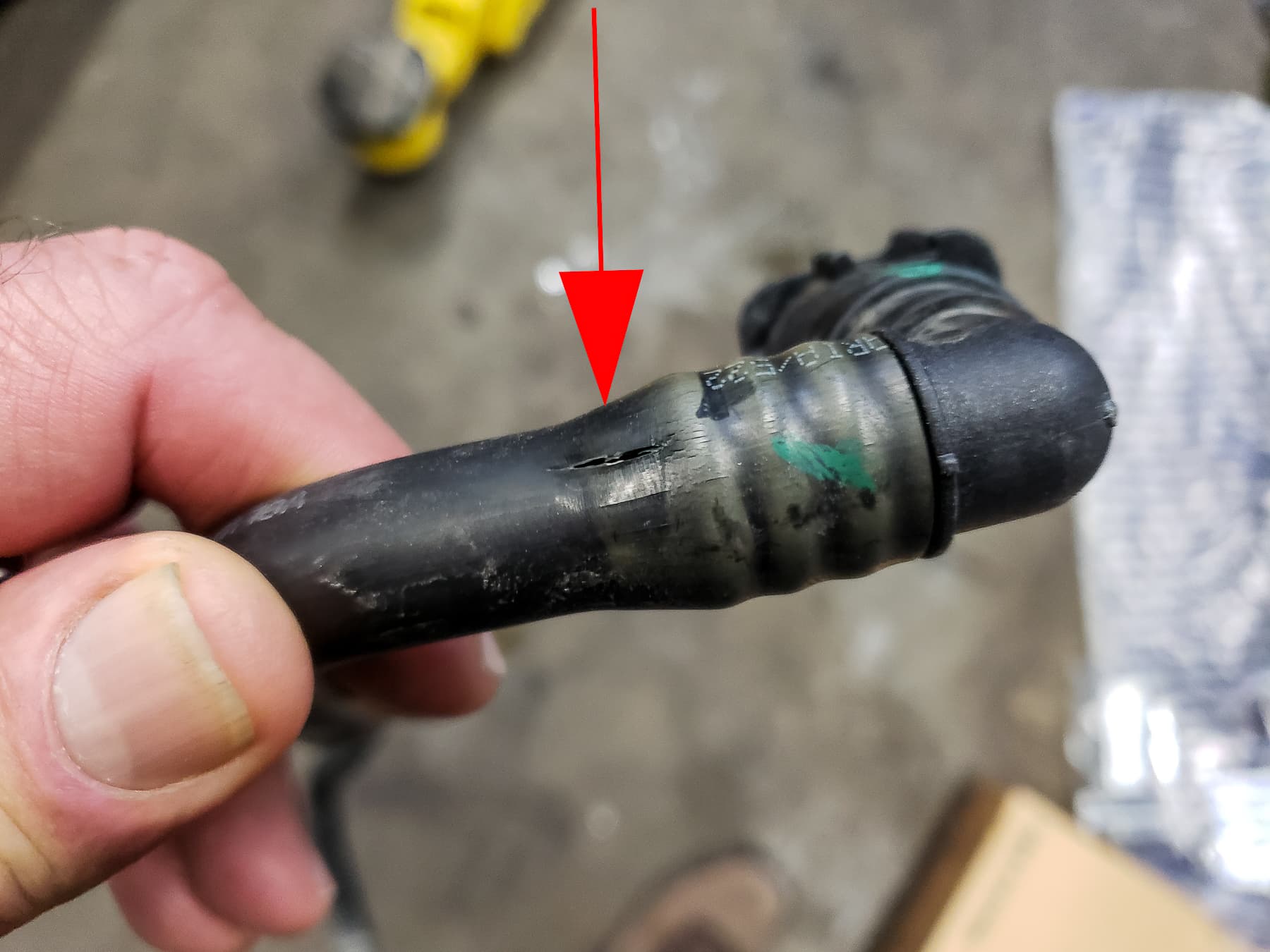 These are a quick connect type of pipe, which is common in most modern vehicle manufacturing. Plastic end with a sort of plastic shrunk over piece. And you can see from this picture here where the arrow points as a split in the plastic of the pipe, that's basically it.

Mark: So which engine is in this vehicle?

Bernie: It's a two litre engine and interestingly enough, in this generation, so this is the second generation of XC90s, the original...

Bernie: Yeah, it's only, it only has a four cylinder. That's the only engine it comes with is a a variety of different four cylinders, depending, I guess, on where you buy it in the world. There's a hybrid version. There are diesel versions and there are gasoline, some with twin turbo, someone single turbos, but they all use a two litre engine. So they've kind of changed the platform around, you know, the previous generation, there was a V8 model. There was a 3.2 litre, which was actually common for quite a while, then a few different six cylinder versions of the same thing. So they've shrunk the power plant down with this redesigned model, which started in 2015.

Mark: So is this a common issue with this pipe on XC90s?

Bernie: Well, this is the first one we've seen at our shop and I don't expect it's going to be the last one because I mean, this isn't, you know, an abused vehicle. It's not that old. And so I think that's probably, I would say defective design or when they built it, it didn't quite stand up to what they expected it to do. So I imagine this isn't going to be the last time we see one of these coming into our shop. And who knows what else we're going to see? But that's certainly one thing that'll, it'll be back. Things get predictable with cars? You know, certain items fail with frequency.

Mark: Yeah. The engineers didn't quite think this through putting that, can I make that assumption? They didn't quite, it's not the best design in terms of putting that bypass pipe underneath everything else and then making it out of, instead of making it a metal, say they made it up the rubber.

Bernie: Yeah. Well now this one is actually plastic. So, you know, and I mean, there's a lot of really good plastics, but there are a lot of plastics that just don't quite stand up to the test of time. And I've often said jokingly around our shop, you know, thank God for European plastics. Although they all use them, but you know, it seems like we do a lot of repairs on European vehicles with plastic, because it just tends to fail sooner than it would if it was metal.

Mark: And it's used a lot more in vehicles than it ever has been, like when I thousand years ago, when I worked on cars a lot, everything was hard cast iron now it's plastic.

Bernie: Oh yeah. It's amazing how engines have gone from yeah, like you said, like hard cast iron. If you look back to the sixties where there was hardly any aluminum used except maybe for the pistons and it's gone further and further. I mean, there's more and more plastic everywhere. I mean it makes sense. It's easy to manufacture. It's lightweight. There's good reasons for it. And you know, it's not as durable in many circumstances as metal is for sure.

Mark: So Volvo is kind of famous for having supposedly having the safest cars on the road, what do you think? Are they still that?

Bernie: No, I don't really know. I mean, I had to do a little thinking about that question and I mean, certainly a lot of other manufacturers have put safety as a very high priority, but I didn't do a little research into this vehicle and there's a lot of safety features on this particular model. The cab has got rollover protection, high strength steel in the roof. And I think a lot of the safety features of Volvos now, I mean, they were the ones who invented the three point seatbelt way back. I don't know even how long ago that was probably in the sixties or fifties or something.

But a lot of these safety features now are more electronic. They're collision avoidance features. And you know, they've put a lot of that into these vehicles and some of them are options, but are they safer than a Tesla, a Mercedes even some General Motors products? I can't really say for sure, but they still put a priority on safety. So they don't own safety like they used to at one time, but they're still pretty good. It's still very much considered when they build a Volvo.

Mark: If you're looking for service for your Volvo in Vancouver, BC, Canada, the guys to call are Pawlik Automotive. You can check out their website and book on there at pawlikautomotive.com. Or call them. Have a conversation they'll get ready for your appointment. (604) 327-7112. You have to call and book ahead. They're busy, always busy, pawlikautomotive.com. Check them out. Thanks Bernie.

Bernie: Thanks, Mark. Thanks for watching. And thanks for listening. We really appreciate it.