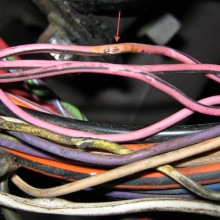 Finding the cause of a fuse that blows constantly can be a time consuming task, one involving a skilled technician and a methodical approach.

Today we serviced a rare 1994 Chevrolet Van equipped with a 6.5 litre Diesel.

Our client¹s concern was that his gauges stopped working along with the glow plug lamp on the dash. He replaced the gauge fuse only to have it blow again within seconds. When a fuse blows like this it is doing its job by protecting the circuit, preventing damage to electrical components and ultimately your vehicle which could catch fire from burning wires.

John started his diagnosis by printing out a wiring diagram of the circuit. Armed with this information he could see which components were involved.

This circuit covers a number of items: the gauges on the instrument panel, part of the glow plug controller and 2 EGR valve solenoids.

Wiring extends from the fuse box to the instrument panel, to the front of the engine compartment and to the engine itself. This leaves many places to inspect: where to start first? Wisely, and based upon years of experience John chose to start with the engine area. The EGR solenoids & glow plug timer were disconnected but still the fuse popped. 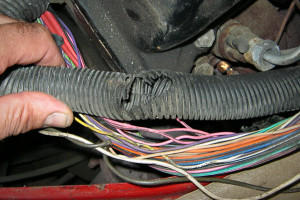 To keep our story short, the cause was found to be a very small wire from the main engine wiring harness which was rubbing against the right rear corner of the engine block. John noted that the protective wiring covering was slightly damaged: looking inside revealed the chaffed wire. That’s what it takes to find a short: knowledge of the circuit, a methodical inspection, and a skilled technician with a keen eye. 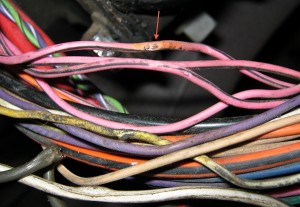