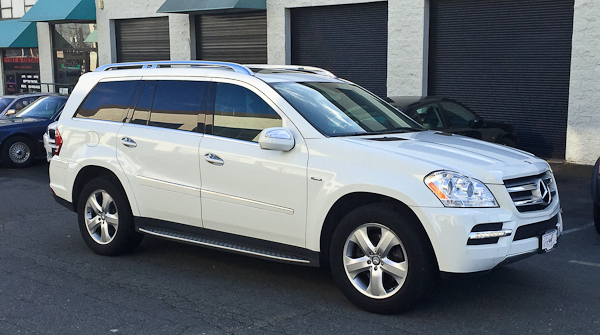 Mark: So we’re going to talk about another Mercedes Benz, another Merc, a GL350 that you had to replace the engine on; a 2010 that seems kind of early. What happened?

Bernie: Very early! Basically the engine seized up and that’s why we replaced it.

Mark: So diesels, aren’t diesels supposed to last kind of a long time? How did this happen on a vehicle that’s not got that many years on it?

Bernie: Well, not only did this vehicle not have a lot of years, it had very little mileage too; only had 50,000 kilometers so that’s what’s even more shocking but you’re right diesel’s are supposed to last a long time and they usually do. This vehicle however, did not have its oil changed regularly enough, maybe never, it’s hard to say. According to the client he had changed it but obviously not enough. What happened is the oil had turned to sludge and the engine got destroyed.

Mark: Wow, how often are oil changes recommended on the Mercedes diesel?

Bernie: Usually its around 15,000 kilometers but they do have an electronic monitoring system that will remind you of when you need to change your oil. If you only drive 5,000 kilometers a year, that would be three years between oil changes which is far too long so they also put a time frame in the monitoring system. But really, as an owner of a vehicle like this you really need to be responsible for it and go a service once a year’s up, even if you've only driven 3 or 5,000 kilometers.

Mark: So, tell us some more about this engine repair, did you find anything else interesting when you were doing the work?

Bernie: Well there was a lot and I’m going to share a few pictures here, so let’s go to the screen share and I’ll put some pictures up.

Bernie: So this is just an example of some of the parts and pieces of the engine repair job. This is an extremely complicated engine and this isn’t even all the bits and pieces. The engine block we have sitting on an engine stand so in this pile on the floor here, there’s the flywheel, all the fuel injectors are on the left side in the bottom, there’s turbo chargers ducts, the wiring harness is that big black thing lying on the floor there with a lot of electrical plugs to connect, there’s a turbo charger near that piece, there’s just a variety of pieces. I’m just showing you this to scare you! If you’re a person who owns a vehicle like this, change your oil regularly because it just makes a lot of sense. 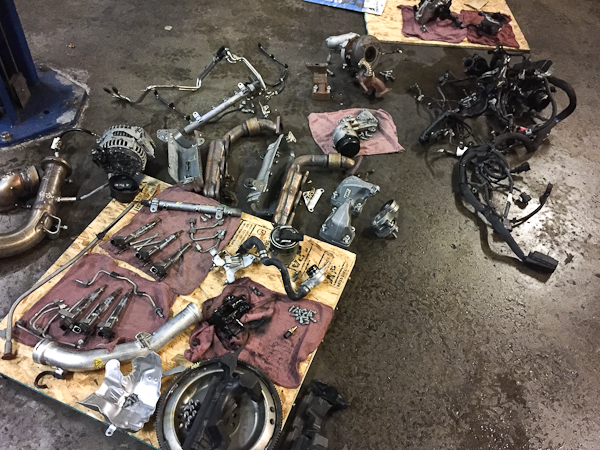 Huge array of parts to be installed on replacement engine. These were all removed from old engine.

This is the view of what we found when we took the oil engine pan off and this was after draining the oil for a while. This is sludge that was in the bottom of the engine oil pan. You can’t really appreciate this unless you actually stick your hands in it, but this is like goopy tar and I think even the least experienced car drivers know that engine oil never looks like this. Here’s another view; this is the bottom of the engine with the oil pan off and that’s basically just the whole bottoms covered in a sludgy, tarry substance. 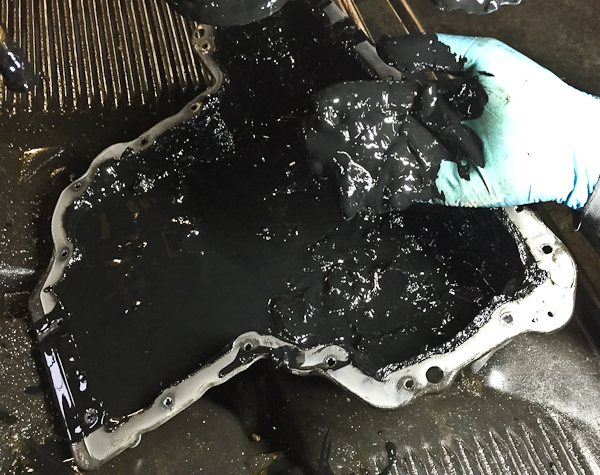 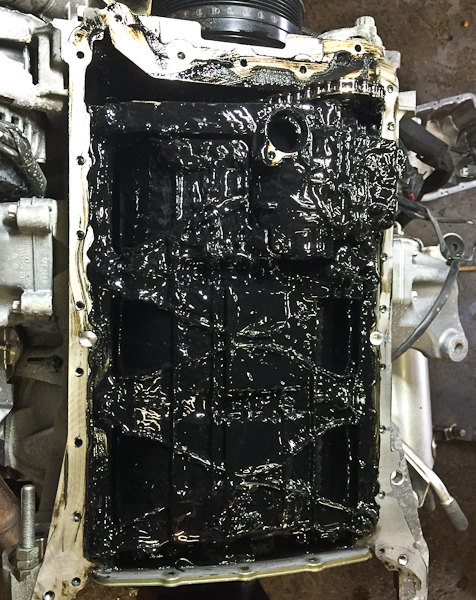 Bottom of the engine with oil pan removed. A thick layer of sludge coats everything.

Just a few other interesting things we found. Carbon build up is a common problem on modern diesel engines because they use an EGR system. It recirculates exhaust gas into the engine to reduce emissions but what it also does is create carbon deposits in the intake system. Normally it takes a long time before this is problematic but this vehicle, with only 50,000 kilometers, has severe carbon deposits. We just never find these on a Mercedes diesel. It’s common on Volkswagens after around two hundred thousand kilometers but this is just an insane amount of buildup. On the top you can see there’s a hole that’s blocked, that’s called a swirl valve and that’s the valve open, that’s the valve closed. Due to these carbon deposits the amount of air flow through these ports is very, very minimal. We spent a lot of extra time on this engine cleaning these ports out to make sure it breathes. Even if this engine had not seized up, it would not have been performing very well with these deposits. 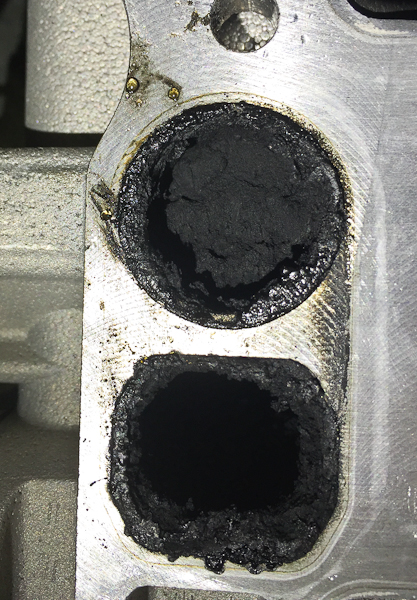 View of intake manifold ports with severe carbon deposits. The upper port is shown with the swirl valve closed. 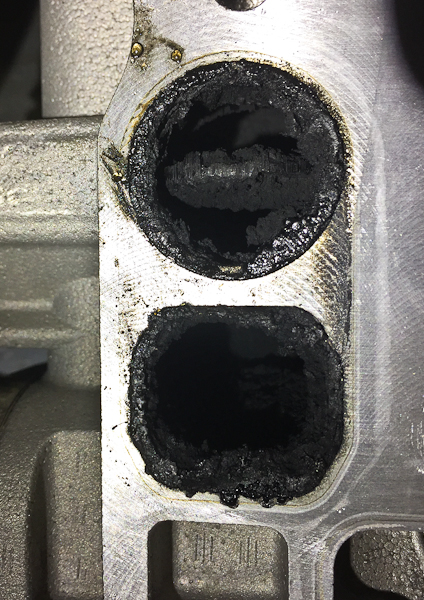 View of the intake ports with swirl valve open. Note the restriction caused by the carbon deposits.

Here’s some more carbon deposits, this is again part of intake passage way. The diameter of this tube has been reduced by at least a third and that has a big effect on engine performance. 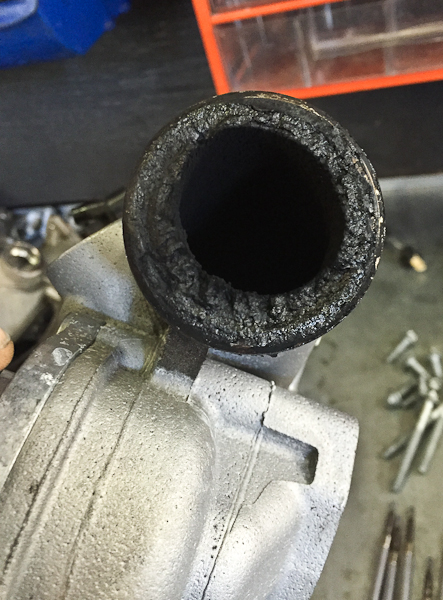 Mark: Alright, so it was a mess, kind of reminds me of the old Fram oil filter ad, "pay me now or pay me later;" would you say this repair illustrates that statement?

Bernie: Very well. The interesting thing with that statement of "you can pay me now or pay me later" is that it implies that you can change your oil and use their quality oil filter and pay a little extra for it or you’ll pay later and it’s a 2 + 2 equals 4 kind of situation. The math however doesn't add up. In the case of this Mercedes at 50,000 kilometers it should have had about 5 oil changes at a cost of about $1,000. The repair bill for this job was well over $20,000 which is 20 times the cost of the oil changes. It definitely makes the changing of oil a lot cheaper plus the owner was out of the vehicle for a couple months and all the associated extra inconvenience. So it really does pay to change your oil, use good quality oil, good quality oil filters, change it regularly; same with all your other fluids because it really does save you money.

Mark: So in the final analysis, when you had to change the engine is it that you actually got a new block for the vehicle. Is that why the job took so long?

Bernie: Yeah, we had to get a rebuilt long block engine. It is quite surprising, considering that this is a fairly common engine found in several Mercedes vehicles, Sprinter vans, and Jeep Grand Cherokees that it’s a very difficult engine to find. There’s nobody around Vancouver who rebuilds them. We had to order it from the U.S. from a rebuilder that specializes in Sprinter engines. Our other alternative was from the Mercedes dealer but I don’t even want to tell you the price for that one, it’s very high. Even a used engine was difficult to find and they were all overpriced. The time frame to source and order the engine plus delivery took a while plus the removal and installation process takes a better part of a week.

Mark: So if you’re looking for repairs on your Mercedes Benz diesel vehicles, the guys to call are Pawlik Automotive; book an appointment 604-327-7112. They’re experts in diesel repairs, they all the right equipment to do it or check out their website pawlikautomotive.com. Thanks Bernie.