Oil Leaks Can Be Dangerous- Pawlik Automotive Repair, Vancouver BC
0

Oil Leaks Can Be Dangerous 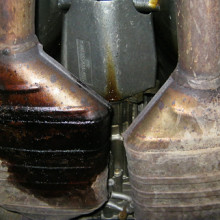 Oil leaks are common as cars age and there are many places for oil to leak from: engine gaskets and seals, transmission gaskets and seals, differential seals and the power steering system. Cost to repair these leaks can vary from under a hundred dollars to into the thousands. While it is often cheaper to add oil than spend money to repair, there are a few reasons why you should fix your oil leaks.

1) Though it is rare, oil leaks can catch fire. We recently found a potentially hazardous leak on a 2001 Audi A8. It is dangerous because the oil is leaking directly onto the left resonator. This part of the exhaust system can become very hot and under the right conditions this leaked oil could ignite.

2) Oil leaks damage our environment. Drips get washed down the storm drains and pollute rivers, lakes and the ocean. While one car dripping a drop of oil here and there is no big deal when you add the thousands of cars on the road together this creates quite a concern.

3) Rubber parts are damaged by oil. Over time if enough oil gets on it, a rubber part will fail and this will cost you extra to repair. Some commonly oil damaged parts that we replace are coolant hoses, engine mounts and suspension bushings.

To prevent such damage, have your car serviced regularly and repair oil leaks as they occur and when they become severe enough. How will you know that you have an oil leak? You may notice drips on the ground under your car; you may need to add oil to your engine; or you may note a burning or unusual smell while driving like our client with the Audi did. It is worth having your car inspected when you note any odd smells for you never know when this could be potentially dangerous. 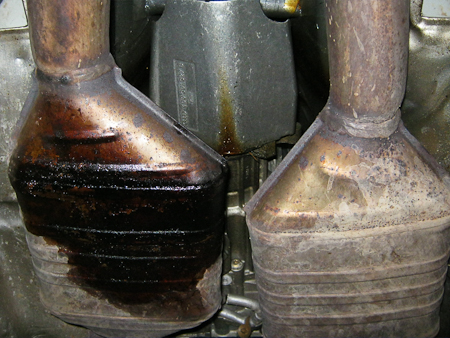