What Parts Are Replaced During a Disc Brake Job?- Pawlik Automotive Repair, Vancouver BC
0

What Parts Are Replaced During a Disc Brake Job? 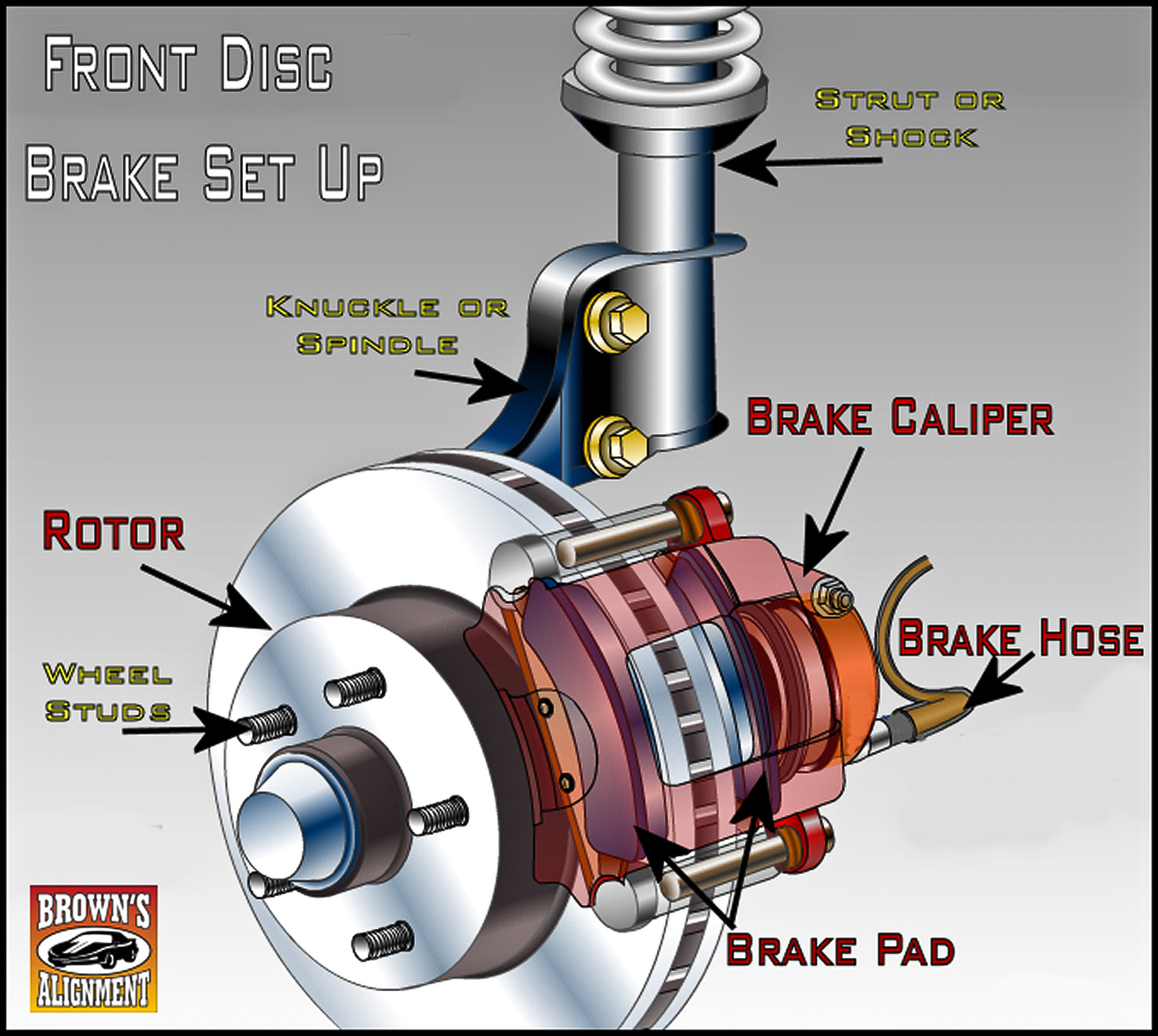 Bernie: No, there’s a lot more to disc brakes than just the pads, although frequently people associate brake pad replacement with the item to do and there’s a number of reasons for this. It’s the most commonly known part and even some fancy European cars have a dash display that will tell you your brake pads are worn out. But brake pads are just part of it. I’m going to show a picture of a full disc brake system here so you can see what is involved with replacement.

Bernie: Ok, so there’s a picture I pulled off the internet compliments of Browns Alignment which I believe is in North Carolina (just to give them credit). This is an illustration of the disc brake system and the brake pads you can see on the bottom right corner, they’ve put arrows and marked the brake pads. What they do is they squeeze, actually they are squeezed against the brake rotor. This is a big disc which rotates with your wheel, in the illustration where it shows wheel studs, that is where your wheel bolts onto the car. so the rotor is rotating with the wheel, the pad squeeze against the brake rotor and they’re squeezed by the brake caliper, which is indicated just sort of half way up on the picture on the right hand side. Inside the brake caliper is a piston that  (this is a simple brake caliper: it just has one piston) squeezes against the brake pads. There are slider pins: which you can see sort of a hollow section just at the top of the brake caliper, that silver rod going through it, that’s the slider pin and those are a critical part of the brake system which we’ll talk about later. So there’s the caliper, the pads and rotors which rotate with the wheels, but the pads wear out, they’re a softer material, they’re a softer friction type of material. A lot of engineering goes into the brake pads to eliminate squeaks and squeals and cause the right kind of braking grab. So that’s the brake pads. Rotors do wear as well, so rotors generally either need to be replaced with the brake pads or machined. But most of the time, probably 95% of the time, the rotors get replaced because they tend to wear quite quickly along with the brake pads. Modern brake pads are made of a very hard material and they tend to wear out the rotors.

Mark: So I guess I just can’t change the pads then?

Bernie: Well, the answer is if you’re doing your own brake job you can pretty much do anything you want but what goes into a quality brake job is assessing the condition of everything. When the pads wear out, it’s important to measure the rotors, there’s a certain specification on how thick the rotors are allowed to be, but if there’s any wear grooves in the rotors which again, 98% of the time there is, the brake pads don’t sit properly when you put them in. Yes you can put them in and they’ll work, but they won’t work as well as they could and they won’t last as long as they should and it leaves a lot of possibilities of squeaks, squeals and grinding noises as well. The brake calipers also need service from time to time and again depending on the condition of the vehicle when it’s newer they generally don’t give any concern but when it’s older there can be problems with the brake calipers too which can impede just changing the brake pads. So a quality brake job requires servicing and or replacing the rotors as well.

Mark: So how often do the callipers need replacement?

Bernie: Well, that really depends on the vehicle. Generally I like to think that the calipers are good for two to three brake jobs. There are some shops that replace calipers every time they do brakes. There’s a theory that the heat generated by the brakes tends to harden the rubber in the caliper seals and cause that to be a liability; and maybe it's not a bad idea but it adds a lot of cost to a brake job. We’ve just found in our experience that calipers tend to last quite a lot longer. Also on some imported vehicles, take an AMG Mercedes when a brake caliper can be a thousand bucks and also a difficult part to find it isn’t justified to replace it, except if it’s worn out. What happens to brake calipers is two things, because there’s a moving piston, the piston will seize up, there’s brake fluid behind the piston which has an affinity for water. If any moisture gets in there it’ll rust up and seize up, so that’s a common problem with calipers. Also the slider pins that I talked about earlier, if it has that, and there are different designs of calipers, but if it has slider pins these can seize up as well, moisture can get in and cause them to seize up. So when we do a brake pad service or brake rotor replacement, we always take a caliper sliders apart, we clean and lubricate everything because the last thing you want is that to seize up some time down the road. You want the brakes to last as long as possible. That brings me to another thing too, sometimes you’ll get a shake in your brakes when you put the brake pedal on and the steering wheel starts shaking and the car will vibrate. Usually this is caused by warped front brake rotors and it’s not an uncommon issue. Now if the brake pads are really thick, say they’re 6 millimetres or thicker you can often get away with just replacing the brake rotors because the pads have still got a couple years of life left in them. Again it’s an assessed type of thing, we need to look at it and see, but if the pads are good just changing the rotors in this case can be a good thing to do. And I think that pretty much covers us for disc brake replacements.

Mark: So if you are looking for brake repairs, brake maintenance, you just want to make sure you’re going to stop give Bernie a call at Pawlik Automotive 604-327-7112 in Vancouver or check out their website pawlikautomotive.com. Thanks Bernie